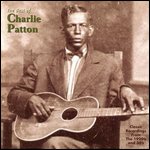 Charlie Patton (between April 1887 and 1891 – April 28, 1934), better known as Charley Patton, was an American Delta blues musician. He is considered by many to be the "Father of the Delta Blues", and is credited with creating an enduring body of American music and personally inspiring just about every Delta blues man (Palmer, 1995). Musicologist Robert Palmer considers him among the most important musicians that America produced in the twentieth century. Many sources, including musical releases and his gravestone,[1] spell his name Charley even though the musician himself spelled his name "Charlie."[2]

Patton was born in Hinds County, Mississippi near the town of Edwards, and lived most of his life in Sunflower County in the Mississippi Delta. Most sources say he was born in 1891, but there is some debate about this, and the years 1887 and 1894 have also been suggested.

Patton's parentage and race have been the subject of debate. Although born to Bill and Annie Patton, locally he was regarded as having been fathered by former slave Henderson Chatmon, many of whose other children also became popular Delta musicians both as solo acts and as members of groups such as the Mississippi Sheiks.[3] Biographer John Fahey describes Patton as having "light skin and Caucasian features."[4] Though Patton was considered African-American, because of his light complexion there have been rumors that he was Mexican, or possibly a full-blood Cherokee, a theory endorsed by Howlin' Wolf. In actuality, Patton was a mix of white, black, and Cherokee (one of his grandmothers was a full-blooded Cherokee).[5] Patton himself sang in "Down the Dirt Road Blues" of having gone to "the Nation" and "the Territo'"meaning the Cherokee Nation portion of the Indian Territory (which became part of the state of Oklahoma in 1907), where a number of Black Indians tried unsuccessfully to claim a place on the tribal rolls and thereby obtain land.

In 1900, his family moved 100 miles (160.9344 km) north to the legendary 10,000 acres (Expression error: Missing operand for * ) Dockery Plantation sawmill and cotton farm near Ruleville, Mississippi. It was here that both John Lee Hooker and Howlin' Wolf fell under the Patton spell as well as Willie Brown, Tommy Johnson, and Fiddlin' Joe Martin.[6] It was also here that Robert Johnson played and was given his first guitar. At Dockery, Charlie fell under the tutelage of Henry Sloan, who had a new, unusual style of playing music which today would be considered very early blues. Charlie followed Henry Sloan around, and, by the time he was about 19, had become an accomplished performer and songwriter in his own right, having already composed "Pony Blues," a seminal song of the era.

Robert Palmer describes Patton as a "jack-of all-trades bluesman" who played "deep blues, white hillbilly songs, nineteenth-century ballads, and other varieties of black and white country dance music with equal facility".[7] He was extremely popular across the Southern United States and also performed annually in Chicago, Illinois and, in 1934, New York City. In contrast to the itinerant wandering of most blues musicians of his time, Patton played scheduled engagements at plantations and taverns. Long before Jimi Hendrix impressed audiences with flashy guitar playing, Patton gained notoriety for his showmanship, often playing with the guitar down on his knees, behind his head, or behind his back. Although Patton was a small man at about 5 foot 5,[8] his gravelly voice was rumored to have been loud enough to carry 500 yards without amplification. Patton's gritty bellowing was a major influence on the singing style of his young friend Chester Burnett, who went on to gain fame in Chicago as Howlin' Wolf.

Patton settled in Holly Ridge, Mississippi with his common-law wife and recording partner Bertha Lee in 1933. He died on the Heathman-Dedham plantation near Indianola on April 28, 1934 and is buried in Holly Ridge (both towns are located in Sunflower County). Patton's death certificate states that he died of a mitral valve disorder.[9] Bertha Lee is not mentioned on the certificate, the only informant listed being one Willie Calvin. His death was not reported in the newspapers.[10] A memorial headstone was erected on Patton's grave (the location of which was identified by the cemetery caretaker C. Howard who claimed to have been present at the burial) paid for by musician John Fogerty through the Mt. Zion Memorial Fund in July, 1990. The spelling of Patton's name was dictated by Jim O'Neal who also composed the Patton epitaph.

Screamin' and Hollerin' the Blues: The Worlds of Charley Patton (2001) is a boxed set collecting Patton's recorded works. It also featured recordings by many of his friends and associates. The set won three Grammy Awards in 2003 for Best Historical Album, Best Boxed or Special Limited Edition Package, and Best Album Notes.[11] Another collection of Patton recordings, released under Catfish Records is titled The Definitive Charley Patton.

Charley Patton's song "Pony Blues" (1929) was included by the National Recording Preservation Board in the Library of Congress' National Recording Registry in 2006.[12] The board selects songs in an annual basis that are "culturally, historically, or aesthetically significant."

The Mississippi Blues Trail placed its first historic marker on Charlie Patton's grave in Holly Ridge, Mississippi in recognition of his legendary status as a bluesman and his importance in the development of the blues in Mississippi.[13] It placed another historic marker at the site where the Peavine Railroad intersects with Highway 446 in Boyle, Mississippi, designating it as a second site related to Patton on the Mississippi Blues Trail. The marker commemorates the original lyrics of Patton's "Peavine Blues" which describes the railway branch of Yazoo and Mississippi Valley Railroad which ran south from Dockery Plantation to Boyle. The marker emphasizes that a common theme of blues songs was riding on the railroad which was seen as a metaphor for travel and escape.[14]

This article uses material from the article Charlie Patton from the free encyclopedia Wikipedia and it is licensed under the GNU Free Documentation License.

Lena em Novembro Marcos Jimenez Trio
Update Required To play the media you will need to either update your browser to a recent version or update your Flash plugin.