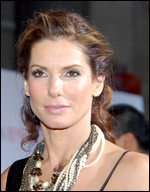 Sandra Annette Bullock (pronounced /blk/; born July 26, 1964) is an American actress who came to fame in the 1990s, after roles in successful films such as Speed and While You Were Sleeping. She has since established her career as a well-known leading Hollywood actress, with films such as Miss Congeniality and Crash, which received critical acclaim. In 2007 she was ranked as the 14th richest female celebrity with an estimated fortune of $85 million.[1] In 2009, at the age of 45, Bullock starred in the most financially successful films of her career, The Proposal and The Blind Side thus earning herself a Golden Globe nomination for each performance at the 67th Golden Globe Awards.[2]

Sandra Annette Bullock was born in Arlington, Virginia, the daughter of Helga D. Meyer, a German opera singer and part-time vocal coach, and John W. Bullock, a voice coach and executive from Alabama.[3][4] Bullock's maternal grandfather was a rocket scientist from Nuremberg, Germany.[5] Bullock lived in Nuremberg until age twelve, where she sang in the opera's children's choir at the Staatstheater Nürnberg.[6] She frequently traveled with her mother on her opera tours, and lived in Germany and other parts of Europe for much of her childhood. She is fluent in German. Bullock studied ballet and vocal arts as a child, taking small parts in her mother's opera productions.

Bullock attended Washington-Lee High School where she was a cheerleader, participated in high school theater productions and dated a football player.[7] She graduated in 1982 and enrolled in East Carolina University in Greenville, North Carolina. She left East Carolina during her senior year (Spring 1986), only three credits short of graduating, to pursue an acting career.[7] She moved to Manhattan to pursue auditions and supported herself with a variety of odd jobs (bartender, cocktail waitress, coat checker).[7]

While in New York, Bullock took acting classes at the Neighborhood Playhouse. She appeared in several student films and later landed a role in an Off-Broadway play No Time Flat.[7] Director Alan J. Levi was impressed by Bullock's performance and offered her a part in the made-for-TV movie Bionic Showdown: The Six Million Dollar Man and the Bionic Woman (1989). After filming the TV movie, Bullock stayed in Los Angeles and was cast in a series of small roles in several independent films as well as in the lead role of the short-lived NBC television version of the film Working Girl (1990). She later appeared in several films such as Love Potion No. 9 (1992), The Thing Called Love (1993) and Fire on the Amazon (in which she agreed to appear topless if the camera did not show that much; she covered herself with duct tape, which apparently was somewhat painful to remove).[7]

One of Bullock's first notable movie appearances was in the science-fiction/action movie Demolition Man (1993), which starred Sylvester Stallone and Wesley Snipes. This role then led to her break-through performance in Speed the following year. She became a high-level movie star in the late 1990s, carrying a string of successes, including While You Were Sleeping (replacing actress Demi Moore, who was originally scheduled to star), and Miss Congeniality. Bullock received $11 million dollars for Speed 2: Cruise Control[7] and $17.5 million dollars for Miss Congeniality 2: Armed & Fabulous.[7]

Bullock was selected as one of People magazine's 50 Most Beautiful People in the World in 1996 and 1999, and was also ranked #58 in Empire magazine's Top 100 Movie Stars of All Time list. She was presented with the 2002 Raúl Juliá Award for Excellence[9] for her efforts, as the executive producer of the sitcom The George Lopez Show, in helping expand career openings for Hispanic talent in the media and entertainment industry. She also made several appearances on the show as Accident Amy, an accident-prone employee at the factory Lopez's character manages. In 2002, she starred opposite Hugh Grant in the global hit Two Weeks Notice.

In 2005, Bullock had a supporting role in the film Crash. She received positive reviews for her performance, with some critics suggesting that it was the best performance of her career. Bullock later appeared in The Lake House, a romantic drama also starring her Speed co-star, Keanu Reeves; it was released on June 16, 2006. Because their film characters are separated throughout the film (due to the plot revolving around time travel), Bullock and Reeves were only on set together for two weeks during filming.[10] The same year, Bullock appeared in Infamous, playing author Harper Lee. Bullock also starred in Premonition with Julian McMahon, which was released in March 2007.[11] This past year has proved to be especially good for Bullock giving the actress two record highs in her career as earlier in year she released The Proposal, a huge hit that has taken in more than $314 million at the box office worldwide making it her most successful picture to date.[12] In November 2009, Bullock starred in The Blind Side, which opened at #2 behind New Moon with $34.2 million, making it her highest opening weekend ever. The Blind Side is unique in that it had a 17.6% increase at the box office its second weekend, and has taken the top spot of the boxoffice in its third weekend. The movie cost $29 million to make according the Box Office Mojo. It has grossed over $129 million to date.[13]

Bullock runs her own production company, Fortis Films. Her sister, Gesine Bullock-Prado, was president of the company but has since quit the business and moved to Montpelier, Vermont, where she opened a pastry shop.[14] Her father, John Bullock, is the company's CEO.[15] Bullock was an executive producer of The George Lopez Show which garnered a lucrative syndication deal that banked her some $10 million (co-produced with Robert Borden).[16] Bullock tried to produce a film based on F.X. Toole's short story, Million-Dollar Baby, but could not interest the studios in a female boxing drama.[17] The story was eventually adapted and directed by Clint Eastwood as the Oscar-winning film, Million Dollar Baby (2004). Bullock's production company, Fortis Films, will produce her next movie, All About Steve.

Since November 2006, Bullock has owned an Austin restaurant, Bess Bistro.[18] She later opened another business in downtown Austin, called Walton's Fancy and Staple; it is a bakery and florist which also offers services such as event planning.[19]

Bullock married motorcycle builder and Monster Garage host Jesse James on July 16, 2005. They met when Bullock arranged for her ten-year-old godson to meet James as a Christmas present.

On December 20, 2000, Bullock survived the crash of a chartered business jet at Jackson Hole Airport. The aircraft hit a snowbank instead of the runway, resulting in both the nose gear and nose cone being ripped off, the right wing partially separating from the aircraft, and the left wing being bent back.[20]

Bullock has been a public supporter of the American Red Cross, twice donating $1 million, first to its Liberty Disaster Relief Fund and four years later in response to the 2004 Indian Ocean earthquake and tsunamis.[21]

In October 2004, Bullock won a multimillion dollar judgment against Benny Daneshjou, the builder of her Lake Austin Texas home; the jury ruled the house was uninhabitable. It has since been torn down and rebuilt.[22] Bullock also owns a house on Tybee Island, which is a few miles from Savannah, Georgia.

On April 22, 2007, a woman was lying outside James and Bullock's Southern California home in Orange County. When James confronted the woman, she ran inside her 2004 silver Mercedes and tried to run him over. The woman is said to be an obsessed fan of Sandra Bullock. The woman, Marcia Diana Valentine, was arrested on investigation of assault with a deadly weapon.[23] In May, Bullock won a three-year restraining order against the woman. Valentine pleaded not guilty to charges of aggravated assault and stalking.[24]

On April 18, 2008, while Bullock was in Massachusetts shooting the film The Proposal, she and her husband were in an SUV that was hit head on (drivers side offset) at moderate speed by a drunken driver. Vehicle damage was not catastrophic and there were no injuries.[25]

Awards and other recognition

Many of Bullock's films have been financial successes. According to The Numbers, her fifteen films from the 1990s grossed over $770 million, placing her among the Top 100 Stars at the Box Office;[27] as of 2009, her films have grossed over $2.9 billion worldwide[28]

This article uses material from the article Sandra Bullock from the free encyclopedia Wikipedia and it is licensed under the GNU Free Documentation License.