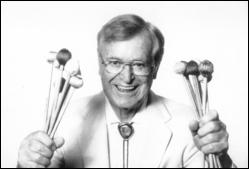 Osterwald began his career as a pianist. He arranged for Fred Böhler in the late 1930s and joined him as a trumpeter in 1941; around this time he also worked with Edmond Cohanier, Philippe Brun, Bob Huber, Eddie Brunner and Teddy Stauffer. He led his own ensemble starting in 1944, recording through the 1970s, with sidemen including Ernst Höllerhagen and Werner Dies. In the late 1940s he recorded with Gil Cuppini and played at the Paris Jazz Fair with Sidney Bechet and Charlie Parker.

This article uses material from the article Hazy Osterwald from the free encyclopedia Wikipedia and it is licensed under the GNU Free Documentation License.

Out Of Nowhere Benny Carter All-Star Sax Ensemble
Update Required To play the media you will need to either update your browser to a recent version or update your Flash plugin.