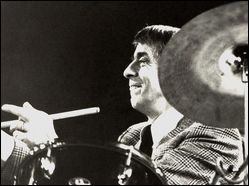 Kenneth 'Kenny' Clare (born 8 June 1929 in Leytonstone, London - died 21 December 1984) was an English jazz drummer. He should not be confused with Kenny Clarke, whose band he played in.

Clare played with Oscar Rabin on English radio in his early 20s. Following this he played with Jack Parnell and then with Johnny Dankworth for an extended period in the 1950s and early 1960s. In the latter decade he played with Ted Heath and Ronnie Stephenson, and played in the studios as a member of Sounds Orchestral. He played drums for the Kenny Clarke-Francy Boland Big Band in 1963-66 when Clarke was unavailable. But from 1967 through 1971 (when the band folded) Clare was a regular paired with Clarke in what became a two-drummer band for performances, concerts, and at least 15 recordings issued by various labels. He also accompanied singers such as Ella Fitzgerald, Tony Bennett, and Cleo Laine. On December 5, 1971 he did a concert at Queen Elizabeth Hall with fellow drummers Buddy Rich and Louie Bellson.

This article uses material from the article Kenny Clare from the free encyclopedia Wikipedia and it is licensed under the GNU Free Documentation License.

Lulu's Back In Town Ellis Marsalis & Branford Marsalis
Update Required To play the media you will need to either update your browser to a recent version or update your Flash plugin.