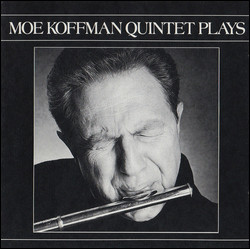 Morris "Moe" Koffman, OC (December 28, 1928 - March 28, 2001) was a Canadian jazz musician and composer. He played the flute, soprano, alto and tenor saxophone and clarinet. Although some jazz purists did not appreciate his sensitivity to popular tastes, his ability to adapt to changing styles reflected his technical skill as a musician and diverse musical interests.

Born in Toronto, Koffman began his musical studies in his native city with Gordon Delamont. He attended the Toronto Conservatory of Music, now the Royal Conservatory of Music of Toronto, where he was a student of Samuel Dolin but later dropped out of school to perform in dance bands. In 1950, he moved to the United States, where he played with big bands including those of Sonny Dunham and Jimmy Dorsey. In 1955, he returned to Toronto where he formed a quartet and later a quintet. He recorded Swinging Shepherd Blues in 1957 which helped establish his reputation as a flautist and ranked him alongside Herbie Mann and Yusef Lateef and later Jeremy Steig as great influential jazz flute players. "Swinging Shepherd Blues" was a hit in the United States, reaching #23 on the Billboard pop chart.

Koffman was inspired by Rahsaan Roland Kirk to play multiple instruments at once; and had a modified set of straps to hold a tenor and an alto saxophone so that he could put forward incredible chords and improvise at the same time. One of the more famous session musicians in Toronto, he appeared in countless commercials, background music, and film and TV soundtracks. Most work on bass flute in Canadian soundtracks from 1950 to 1990 in Toronto sessions was done by Koffman on this rare instrument. Koffman was also an exponent of circular breathing techniques for his large volumes of sound, and joined fellow Canadian Maynard Ferguson and new age multi-instrumentalist musician Ron Allen in this talent.

During the 1970s, Koffman recorded several popular albums with arrangements of works by classical composers including Bach, Mozart and Vivaldi. He also was a guest performer with a number of symphony orchestras across Canada.

He performed with Dizzy Gillespie and Peter Appleyard during the 1980s. He often performed with Rob McConnell's Boss Brass. From 1956 to 1990, Koffman booked performers for George's Spaghetti House in Toronto, where he performed weekly. His compositions "Curried Soul" and "Koff Drops" have been used as the opening and closing themes respectively for the CBC radio show As It Happens for over 30 years, and are consequently probably his best-known recordings.

Koffman died of cancer in Orangeville, Ontario in 2001 at the age of 72. He had been diagnosed with non-Hodgkin's lymphoma about a year earlier. Some of his music for Duke Street Records remains unreleased; however Music for the Night was released and re-issued in 2007, and Devil's Brew was re-issued in 2009.

He was appointed to the Order of Canada in 1993 and inducted into the Canadian Music Hall of Fame in 1997. In 2002, Moe Koffman was a MasterWorks honouree (video clip) by the Audio-Visual Preservation Trust of Canada.

This article uses material from the article Moe Koffman from the free encyclopedia Wikipedia and it is licensed under the GNU Free Documentation License.