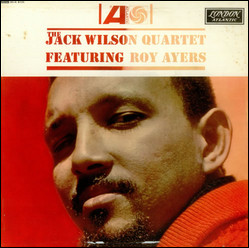 Wilson was born in Chicago on August 3, 1936, moving to Fort Wayne, Indiana at age seven. From 1949-54, he studied piano with Carl Atkinson at the Fort Wayne College of Music. It was during this time that he was introduced to the music of George Shearing.

Later picking up tenor saxophone, Wilson played in the Central High School band and began performing locally as a leader of small combos. By his fifteenth birthday, he had become the youngest member ever to join the Fort Wayne Musicians Union (Local 58). At the age of 17 he played a two-week stint as a substitute pianist in James Moodys band.

After graduating from Central High, Wilson spent a year-and-a-half at the Indiana University, encountering Freddie Hubbard and Slide Hampton. Touring with a rock n roll band, he wound up in Columbus, Ohio, connecting with the then unknown Nancy Wilson and Rahsaan Roland Kirk.

After a year in Columbus, Wilson moved to Atlantic City, leading the house band at the Cotton Club, now adding organ to his musical arsenal. At the Club he encountered Dinah Washington, with whom he worked from 1957-58.[2]

Returning to Chicago, Wilson played with Gene Ammons, Sonny Stitt, Eddie Harris and Al Hibbler. His longest gig there was at the Persian Lounge with bassist Richard Evans, with whom Jack made his recording debut as a sideman on Richards Almanac (July 2123, 1959). Drafted into the Army, he went to Fort Stewart, GA. and became the first Black music director for the Third Army Area, playing tenor saxophone in the army band.

In 1961, Wilson received an honorable medical discharge (because of diabetes). He returned to Dinah Washingtons band from 1961-62. Encouraged by Buddy Collette, he moved to Los Angeles.

He appeared on and wrote the title track for Earl Anderza's debut album Outa Sight! (1962).[3]

Jack Wilson was part of the Ike Isaacs trio and is a strong presence on several of Lambert Hendricks and Ross recordings including "LHR sing Ellington".

With an enviable list of credentials for someone who was only 26, Jack was given the opportunity to take center stage. The year of 1963 would yield his first recording as a leader, The Jack Wilson Quartet featuring Roy Ayers for Atlantic Records (January 24 & February 6). An impressive debut by any standards, the session kicks off with Jacks blazing Jackleg which gallops ferociously from the starting gate. This lively session would be followed by another Atlantic date fifteen months later, three sessions for Vault (Atlantics subsidiary) and then the coveted invitation to the Blue Note label, the results of which produced three records, including the classic Easterly Winds in 1967.

After his final Blue Note session in 1968, Jack Wilson focused on work with vocalist Esther Phillips until 1977, when he recorded Innovations, the first of three record dates for the Los Angeles-based Discovery label. This also brought about a return to sideman work with Lorez Alexandria, Tutti Camarata and Eddie Harris well into the 1980s.

In 1985, Jack relocated to New York City with the help of jazz pianist, Barry Harris, and appeared in duo performance with Harris at the Jazz Cultural Theater 368 Eighth Ave. (between 28th and 29th Streets) New York, NY, February 1, 1985, a club operated by Harris. Wilson continued to work for several years in New York City. Among his many appearances are a duo with bassist Boots Maleson at Joanna's restaurant, 18 East 18th Street, on August 30, 1986 and at Bradley's bar and restaurant (University & East 12th Street) in duet with jazz bassist, Peter Washington, March 3, 1989, each of these gigs advertised in the Village Voice, a local New York City newspaper.

Jack Wilson died on October 5, 2007. His death, at the Northport Veterans Administration Medical Center, was caused by complications of diabetes, according to his wife, Sandie Boerum-Wilson, of Sayville, NY.

This article uses material from the article Jack Wilson (jazz pianist) from the free encyclopedia Wikipedia and it is licensed under the GNU Free Documentation License.

Almost Like Being In Love Modern Jazz Quartet & Sonny Rollins
Update Required To play the media you will need to either update your browser to a recent version or update your Flash plugin.