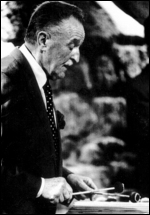 Hausser played accordion as a child and taught the instrument in his early twenties before switching to vibraphone in 1948. Initially, he studied the instrument classically, but by the mid-1950s was working as a sideman, playing during that decade for Eddy Barclay, Christian Chevallier, Henri Crolla, Benny Golson, Stephane Grappelli, Roger Guérin, Bobby Jaspar, Lucky Thompson, and Sarah Vaughan. In 1964 he formed his own trio ensemble with bassist Jacky Samson; his drummers for this venture included Jean Guérin, Franco Manzecchi, and Teddy Martin. Later in the 1960s he worked with Georges Arvanitas and Johnny Griffin. In the 1970s he moved to Germany, where he became a professor in Münster.

This article uses material from the article Michel Hausser from the free encyclopedia Wikipedia and it is licensed under the GNU Free Documentation License.

Joyce's Samba Erich Gandet Quintet
Update Required To play the media you will need to either update your browser to a recent version or update your Flash plugin.