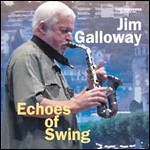 Jim Galloway (born James Braidie Galloway 28 July 1936 in Kilwinning, Ayrshire, Scotland)[1] is a jazz clarinet and saxophone player. He has based his career in Canada since emigrating in the mid-1960s. He began an ensemble, the Wee Big Band, in the late 1970s.

One of his albums, Walking On Air, was nominated for Best Jazz Album at the Juno Awards of 1980.

This article uses material from the article Jim Galloway from the free encyclopedia Wikipedia and it is licensed under the GNU Free Documentation License.