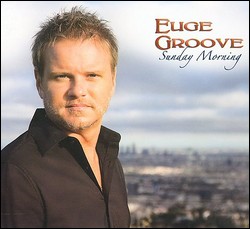 Born in Hagerstown, Maryland, he graduated from the University of Miami School of Music in 1984.[1] Grove did not record his first solo album until 2000. Prior to that, he had replaced Richard Elliot in the Tower of Power when Elliot decided to pursue a solo career, and he also did session work with various pop acts, most noticeably the Miami girl group Exposé. He has a sax solo on their No. 1 hit "Seasons Change," and another on their 1993 hit "I'll Never Get Over You (Getting Over Me)."

Grove adopted the name Euge Groove; initially presumed to be coined by fans who saw him perform in Europe, Grove later indicated in an interview on XM Radio in 2006 that his mother-in-law conceived the idea for his stage name.

Grove and his wife Bane have three children; Dax, Canyon, and Lilah Belle.

This article uses material from the article Euge Groove from the free encyclopedia Wikipedia and it is licensed under the GNU Free Documentation License.

Lean On Me Lynne Arriale Trio
Update Required To play the media you will need to either update your browser to a recent version or update your Flash plugin.