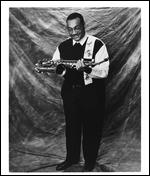 Clayton studied oboe at California State University and undertook a tour with Stevie Wonder. Following this he recorded with Gladys Knight, Kenny Rogers, Michael Jackson, Patti Labelle, and Madonna. With his brother John Clayton he founded The Clayton Brothers in 1977, and later formed the Clayton-Hamilton Jazz Orchestra with Jeff Hamilton.

He has worked with Frank Sinatra, Sammy Davis Jr., Ella Fitzgerald, Woody Herman, Lionel Hampton, Ethan Smith, and Lena Horne, and played in the Count Basie Orchestra while under the leadership of Thad Jones. From 1989 to 1991 he was a member of the Phillip Morris Superband. He also toured with Gene Harris, Dianne Reeves, Joe Cocker, B.B. King and Ray Charles.

In December 2009 Brother To Brother by The Clayton Brothers received a Grammy nomination in the Best Jazz Instrumental Album, Individual or Group category.

This article uses material from the article Jeff Clayton from the free encyclopedia Wikipedia and it is licensed under the GNU Free Documentation License.

Body And Soul Al Cohn
Update Required To play the media you will need to either update your browser to a recent version or update your Flash plugin.