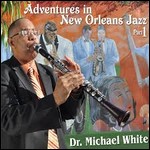 White is a classically trained musician who began his jazz musical career as a teenager playing for Doc Paulin's Brass Band in New Orleans. He was a member of an incarnation of the Fairview Baptist Church Marching Band, established by banjoist Danny Barker. He was discovered by Kid Sheik Colar, who heard him onstage performing in Jackson Square in the French Quarter. He began working with the musician regularly following the encounter. A staunch jazz tradionalist, White can be heard on the 1989 album The Majesty of the Blues by Wynton Marsalis.[2] Wynton also appears on White's 1990 album titled "Crescent City Serenade", along with musicians Wendell Brunious and Walter Payton.

White has led several bands in the New Orleans area, and has accompanied various artists on other recording projects. Since 1979 he has played in the Young Tuxedo Brass Band, founded by clarinetist John Casimir sometime in the 1940s.[3] During the 1980s he also led a band called The New Orleans Hot Seven. Performing "A Tribute to Jelly Roll Morton" in concert with them at the Lincoln Center in New York City in 1989 led to a favorable review by Jon Pareles in the New York Times shortly after. On May 25, 2004, a selection from White's album "Dancing in the Sky" ("Algiers Hoodoo Woman") was broadcast on NPR's All Songs Considered.[4][5] The "Dancing in the Sky" album is mostly original compositions by White.

In 1981, White founded The Original Liberty Jazz Band with the express intent of preserving the musical heritage of New Orleans. The group has performed an end-of-year concert at the Village Vanguard every year since the early 1990s.[6] On May 13, 2006 White performed "Just a Closer Walk With Thee" at the Tulane University commencement ceremony. Former Presidents George H. W. Bush and Bill Clinton were in attendance at the ceremony. Mr. Clinton was moved to make a remark about the performance during his speech.[7]

"It was played the way Dixieland bands have always done it. At first low, weeping, sorrowful."

Jazz festivals White has performed at:

White is also a college professor who formerly taught Spanish, now teaching African-American Music at Xavier University of Louisiana,[9] a member of Historically Black Colleges and Universities (HBCU). At the university, he holds the Rosa and Charles Keller Endowed Chair in the Humanities of New Orleans Music and Culture. He has also served as guest director at several Jazz at Lincoln Center concerts relating to traditional New Orleans jazz, often working with Wynton Marsalis. White has also served as a commissioner for the New Orleans Jazz National Historical Park.[10]

White was living in a one story home in the Gentilly district of New Orleans, near the London Avenue Canal, before the catastrophic flooding of most of New Orleans due to the Federal levee failures during Hurricane Katrina in 2005. White was a substantial collector of jazz artifacts and history in New Orleans for 30 years, but lost nearly everything in the flooding. He had owned the original sheet music of "Dead Man Blues" by Jelly Roll Morton, a clarinet mouthpiece by Sidney Bechet, and had a collection of an estimated 5,000 records and LPs. He lost it all in the flooding.[11] White feels that jazz music in New Orleans will become strengthened by the experience of Katrina, that a sense of fervor has and will rise out of the catastrophe.[12] White is related to early jazz notables Papa John Joseph and "Kaiser" Willie Joseph, among others.

The discography used allmusicguide.com as one guide.

This article uses material from the article Michael White (clarinetist) from the free encyclopedia Wikipedia and it is licensed under the GNU Free Documentation License.

10 Ans Murat Öztürk
Update Required To play the media you will need to either update your browser to a recent version or update your Flash plugin.