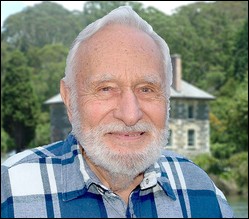 Garcia was born in Oakland, California, but was a longtime resident of New Zealand. Self-taught, his break came when he substituted for an ill colleague on a radio show. Subsequently, he went on to become a composer/arranger at NBC Studios for such television shows as Rawhide 1962 and Laredo, 196567. He worked at Universal Studios and MGM, where at the latter he composed and conducted the original scores for such films as George Pal's The Time Machine (1960) and Atlantis, the Lost Continent (1961). He also orchestrated the music for Father Goose (1964) and The Benny Goodman Story (1956). Garcia collaborated with many Hollywood musicians and celebrities, including Ella Fitzgerald, Louis Armstrong, Anita ODay, Mel Torme, Julie London, Oscar Peterson, Stan Kenton, Maynard Ferguson, Walt Disney, Orson Welles, Jane Wyman, Ronald Reagan, Andy Williams, Judy Garland, Henry Mancini, and Charlie Chaplin making arrangements and conducting orchestras as needed.[2] Russ loved to ski so he would write on-site scores to ski-content films.

One of five brothers, he grew up in what he said was an ordinary household where music was something that came out of the radio.[2] When his family noticed the five-year-old Russ standing by the radio every Sunday morning waiting for the New York Philharmonic to come on, it was obvious the child had a special interest in music. One of his brothers presented him with an old cornet he bought for $5, which Russ taught himself to play. In school he started a jazz band to play his new horn, and ended up using the band as an outlet for his compositions and arrangements of standards, all of which were self-taught. Ive been able to read music since I was little, he said at the time. I dont know how, because I had lessons only when I went to high school. Call it instinct, call it a gift, Ive never questioned my musical ability. Im thankful for it. If I take up a sheet of manuscript paper and a pen theres a whole orchestra playing in my head. At times I cant write quickly enough to keep up with whats flowing out of me.

Garcia and his wife Gina Mauriello Garcia, a published author and singer-lyricist-writer in her own right, became members of the Bahá'í Faith in 1955.[3] In 1966, at the height of his career they sold their home and possessions, bought a boat, and on 1 June set sail. The couple knew nothing about sailing and his wife did not know how to swim and the early arrival of Hurricane Alma forced them to return with damage after only two days at sea. It was December before the boat was finally repaired and they set forth once again. This time they reached Nassau without any further complications and spent several years as "travel-teachers" for the Bahá'ís as they went around the world to places like the Galapagos Islands, Haiti, Cuba, Jamaica, Tahiti and the Marquesas Islands.

When they reached Fiji in 1969, some musicians from Auckland, New Zealand invited Garcia to do some live concerts, radio and television shows and to lecture at the various universities around the country on behalf of the New Zealand Broadcasting Commission and Music Trades Association. Russell, finished with his lectures and concerts and on advice of friends, drove up to the Bay of Islands in the north of North Island. Garcia and his wife fell in love with the location and bought a house on the waters edge of Tangitu Bay in the Te Puna Inlet, east of the Purerua Peninsula near Kerikeri.[2]

They spent many years there, but after they moved to Kerikeri, Garcia continued to compose and arrange, including projects in the United States and around the world. His most recent project prior to his death was his and Ginas first opera, The Unquenchable Flame. Together, the Garcias further volunteered their services on a regular basis to teach primary school children in New Zealand about the virtues gained through the use of songs, stories, games and creative exercises.[2]

On 27 May 2005 the L.A. Jazz Institute honored Garcia for his more than 60 years of contributions to jazz. The evening was hosted by Tierney Sutton and guest speakers included Bill Holman (musician), Duane Tatro and Bud Shank.[5] Charmed Life: Shaynee Rainbolt Sings Russell Garcia is a recent CD release featuring his work in collaboration.[2]

Russell and Gina Garcia both received the 2009 Queen's Service Medal for New Zealand for their service to music.[6]

When he was eleven years old, the Oakland Symphony Orchestra performed his arrangement of "Stardust". By the time Garcia was in high school, he was working five nights a week playing music and earning more than his father, who was a credit manager in a large department store. After one year at San Francisco State University he dropped out because he felt he was not learning enough and instead went on the road with several big bands. But he remained unsatisfied, because he said I wasnt advancing fast enough. He recalled, I quit and went to Hollywood and had lessons with the best teachers I could find. He studied composition, harmony, orchestration, counterpoint and form. He took lessons on every instrument so he could write for each with a deeper awareness, rather than just by ear as he had done in the past. He also conducted the West Hollywood Symphony Orchestra once a week for two years, a remarkable experience for a young man in his 20s, and he said it primed him for what was to come.

His first break came in 1939, when the composer/conductor of the radio show This is Our America fell ill and Garcia was recommended to fill in. He so impressed the director, Ronald Reagan, that he was kept on for two years. Reagan was then married to Jane Wyman who recommended Garcia to NBC, where he was hired as a staff composer and arranger. As word got out, he said he never had to look for work: Its always come to me. I do lead a charmed life. Soon after Henry Mancini called on Garcia and his extraordinary talent of transcribing note for note, instrument for instrument, to work on The Glenn Miller Story. Charlie Chaplin hired him to do all the arrangements for Limelight, and Universal Studios contracted him to work as composer, arranger and conductor. He remained in the post for 15 years. In 1957 when an arranger/conductor was needed for the Louis Armstrong and Ella Fitzgerald record album Porgy And Bess, Garcia was hired. He undertook three more albums and a concert at the Hollywood Bowl with Armstrong.

Bethlehem Records often called on Garcia for his arranging abilities; he was one of the few Hollywood soundstage and studio veterans who could easily and naturally switch from film scoring to jazz arranging without missing a beat.[2] Developing a parallel career, not only did he provide arrangements for many singers and instrumentalists, he recorded over 60 albums under his own name, as well as composing for cutting-edge projects such as the Stan Kenton Neophonic Orchestra.

He has always been an innovator with his music using experimental frameworks on which newer and greater presentations could be fashioned, as he proved, assembling his unexpected and groundbreaking four-trombone band [7] with brass players Frank Rosolino, Tommy Pederson, Maynard Ferguson and Herbie Harper. Marty Paich can even be heard on some of these sessions at the piano. He used this instrumentation and sound to great success in collaborations with singers like Frances Faye and Anita ODay, and brought it back in his most recent collaboration: a recording of all Garcia originals with New York vocalist, Shaynee Rainbolt.[8]

Although he loved what he was doing, he decided to walk away from it all in 1966. I fought in the Battle of the Bulge during World War II and vowed that if I ever got out of it alive, I was going to dedicate myself to world peace. The Garcias decided to sail the Pacific Ocean, carrying the message of peace and the Bahá'í Faith to the remote islands of the South Pacific. Garcia said, Not many people have the chance to follow their hearts with no financial worries. We had the charm working for us: we knew the royalties would see us through for some years. They spent the next six years on their 13-metre fiberglass trimaran the Dawn-Breaker, as traveling teachers, anchoring in such exotic locations as Jamaica, the Galapagos Islands, the Marquesas and Tahiti.

In Fiji, in 1969, the charm spun again when musicians visiting from Auckland invited Garcia, on behalf of the New Zealand Broadcasting Commission and the Music Trades Association, to do live concerts, radio and TV shows as well as lecture at universities around the country, a perfect fit seeing as Garcia is also known in music circles as the author of what are considered the definitive textbooks on composition: The Professional Arranger Composer Books I and II. They have been translated into six languages and are used in universities and conservatories around the world.

His Baha'i music includes the music (and non scripture lyrics) for 1960s and 1970s songs "One Heart Ruby Red" (with Donna Taylor), "Nightingale of Paradise" (with Gina Garcia), "Hollow Reed", "We Will Have One World", "The Hatin' Wall" (with Donna Taylor), "Live in the Glory" (with Dorothy Wayne), "Hidden Words", and "Into Parched and Arid Wastelands"[10]

This article uses material from the article Russell Garcia (composer) from the free encyclopedia Wikipedia and it is licensed under the GNU Free Documentation License.

Sometimes I Have A Heartache Christine E. Jaccard & Dave Ruosch
Update Required To play the media you will need to either update your browser to a recent version or update your Flash plugin.