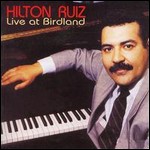 Born in New York City, Ruiz began playing piano at the age of five after being inspired by Duke Ellington.[1] At the age of eight he performed Mozart at Carnegie Hall.[2]

In high school Ruiz studied jazz piano with Mary Lou Williams. In 1973 he was a sideman for Roland Kirk, then later for Clark Terry. He also worked with Betty Carter, Tito Puente, and Mongo Santamaría. He co-wrote a music instruction book, Jazz and How to Play It.[3] He appeared on the soundtrack to Woody Allen's Crimes and Misdemeanors.[4]

On May 19, 2006, Ruiz was found unconscious on Bourbon Street in New Orleans, where he had gone to promote a CD benefiting the victims of Hurricane Katrina. The police filed a report that he had injured himself in an accidental fall. Ruiz was hospitalized in a coma[5] and died without regaining consciousness a week after his 54th birthday. Ruiz was a resident of Teaneck, New Jersey.[4]

He was buried at Saint Raymond's Cemetery in New York City.

This article uses material from the article Hilton Ruiz from the free encyclopedia Wikipedia and it is licensed under the GNU Free Documentation License.

Alone Too Long John Harrison Trio
Update Required To play the media you will need to either update your browser to a recent version or update your Flash plugin.