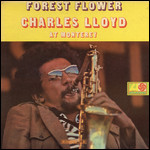 Lloyd describes his music as having always "danced on many shores". As Peter Watrous noted, "Lloyd has come up with a strange and beautiful distillation of the American experience, part abandoned and wild, part immensely controlled and sophisticated."[2]

Despite recording several albums during the 1970s and occasionally appearing as a sideman, he practically disappeared from the jazz scene. During the 1970s Lloyd played extensively with The Beach Boys both on their studio recordings and as a member of their touring band. In the late 1970s Lloyd was a member of Celebration, a band composed of members of The Beach Boys' touring band as well as Mike Love and Al Jardine. Celebration released two albums.

From 1989, Lloyd toured actively and recorded for the ECM label. Although his playing had not changed much stylistically since his work in the 1960s, these recordings showcased his sensitivity as a ballad player. Noteworthy albums include Canto; Voice in the Night; The Water Is Wide featuring Brad Mehldau, John Abercrombie, Larry Grenadier and Billy Higgins; Lift Every Voice (featuring Geri Allen); and the live Rabo de Nube with Jason Moran.

Lloyd has shown great consistency and creativity in his period with ECM, much of his music containing a strong spiritual element, some of it heavily in a "world music" vein, and some of it unusual and experimental, as in the duets on Which Way is East? with his longtime friend and musical soulmate, Billy Higgins.[3][4][5]

Allmusic noted that Lloyd's 2013 newest offering, Hagar's Song, a duo recording with Jason Moran finds the musicians "at their most naturally curious and deeply attentive best, offering a conversation so intimate the listener may occasionally feel she is eavesdropping." [6]

Charles Lloyd maintains an active performance and recording schedule with the New Quartet, Sangam, Maria Farantouri and special projects around the world. He celebrated his 75th birthday in 2013 with concerts in the Temple of Dendur at the Metropolitan Museum and the Kennedy Center Concert Hall.

On April 26, 2013 Charles Lloyd was given an Award of Merit from the city of Tallinn, Estonia for his pioneering contributions to bringing jazz to Estonia from 1976 to the present.

Charles Lloyd is the recipient of the 2013 Miles Davis Award from the Festival International de Jazz de Montreal.

Lloyd lives in Southern California with his wife, Dorothy Darr.[7]

This article uses material from the article Charles Lloyd (jazz musician) from the free encyclopedia Wikipedia and it is licensed under the GNU Free Documentation License.

After The Rain Rigmor Gustafsson
Update Required To play the media you will need to either update your browser to a recent version or update your Flash plugin.