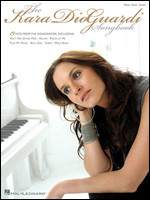 She is also a judge on American Idol, having joined the show in its eighth season and is now working with its winner, Kris Allen. DioGuardi currently serves as Vice President of A&R for Warner Bros. Records where she was appointed to in 2008.

DioGuardi was born in Ossining, New York.[4] She is of Albanian (Arbëresh) [5][6][7] and Italian[8] descent. She is the daughter of Carol Asselta[9] and former Republican Congressman Joseph J. DioGuardi.[4] She is a cousin of the veteran TV personality Regis Philbin.[10] Her mother died in 1997 after a 7-year battle with ovarian cancer.[11]

Kara grew up in the Wilmot Woods section of suburban New Rochelle, New York[12] and attended kindergarten at the Immaculate Heart of Mary School in Scarsdale, New York, followed by The Masters School in Dobbs Ferry, New York, before earning a degree in political science at Duke University.[4] After graduating from college, she worked for Billboard magazine selling advertising.[4], and also at KVII-TV in Amarillo, Texas as the weekend sports anchor.

DioGuardi has a songwriting catalog of several hundred songs, of which over 279 have been released on major labels worldwide, and over 169 have appeared on multi-platinum selling albums. She has had nearly 50 international charting singles over the course of her career, and her songs have helped propel 58 albums into the Top Ten of the Billboard 200. Her songs have been featured in major motion pictures, television shows, film soundtracks, and radio spots, as well as national and international commercial campaigns.

She collaborated with Christina Aguilera on her album Back To Basics in 2006, co-writing 12 of the 13 tracks on disc one of the album, among them being "Ain't No Other Man", and "Back In The Day".

In 2007, DioGuardi worked with many notable artists, one of which was Britney Spears. DioGuardi wrote and produced two songs ("Ooh, Ooh Baby" and "Heaven on Earth") on Spears' album Blackout.

Since last seasons American Idol Season 8, Kara returns to her songwriting and producing. Her work has paid off as shes enjoying a host of new hits from a diverse group of artists including Pinks Sober, Kelly Clarksons I Do Not Hook Up, Cobra Starship ft./ Leighton Meester Good Girls Go Bad, and Theory of a Deadmans Not Meant to Be among other new releases.

Among DioGuardi's notable recent projects is the song "Not Meant To Be", which appears on Theory of a Deadman's 2008 album, Scars & Souvenirs.[13] DioGuardi co-wrote the song with lead singer Tyler Connolly, and is also featured as the love interest in the music video which was released on March 10, 2009. This was her debut in the music video industry.[14]

Dioguardi also cowrote and sang the backup vocals for Demi Lovato's single "The Middle" for her first album, Don't Forget.

DioGuardi co-owns Arthouse Entertainment, a publishing company that is a resource business for record companies and other music entities seeking compositions, productions, artists, and related music services. Arthouse has been a part of many chart-topping hits including Cassie's "Me & U" (written and produced by Ryan Leslie), Jim Jones' "We Fly High" (produced by Zukhan Bey), Nick Lachey's "What's Left of Me", David Archuleta's single "Crush" (written and produced by Eman Kiriakou), Mika's "Grace Kelly" and also OneRepublic's "Apologize" and "Stop and Stare" (all produced by Greg Wells), Faith Hill's "Lost" (written and produced by Kara DioGuardi and Mitch Allan), Sober by P!nk, "Pieces of Me" by Ashlee Simpson, "Boom Boom Pow" by the Black Eyed Peas, and "He Could Be The One" by Hannah Montana.

In July 2006, DioGuardi was a judge in an "Idol"-like TV show called The One: Making a Music Star. The show debuted on ABC with the second-lowest rating ever for a premiere on a major American network and was abruptly canceled after just two weeks.[16]

She joined the hit Fox television show American Idol as a fourth judge for the show's eighth season,[17] and appeared in the season finale in a bikini to sing against contestant Katrina Darrell, better known as "Bikini Girl", who had appeared during the audition rounds.

She will return to Idol for its ninth season.[18] She has had Idol connections in the past: in 2000, DioGuardi and fellow Idol judge Paula Abdul co-wrote the UK number-one single "Spinning Around", performed by Kylie Minogue. She has written many songs sung by Idol winners and alumni such as Kelly Clarkson, David Archuleta, Carrie Underwood, Diana DeGarmo, and Katharine McPhee. She co-wrote the American Idol season 8 single, No Boundaries, which was performed by both finalists during the competition. The song "No Boundaries" has since been dropped from the set list the American Idol tour.[19]

In 2003, DioGuardi won a BMI Cable Award for cowriting and performing, Somethin' To Say, the theme to the now-cancelled Lifetime Television series For the People, which starred Lea Thompson, Debbi Morgan, A. Martinez and Cecilia Suarez. Kara has been awarded 11 BMI Awards for having co-written the most performed songs on the radio. One of the industrys most highly sought after songwriters and producers, DioGuardis songs have appeared on more than 100 million records.

In 2007, DioGuardi was nominated for a Latin Grammy in the category of Best Song for her writing on the Belinda single, "Bella Traición" along with co-writers Belinda, Ben Moody, Nacho Peregrin and producer Mitch Allan. In November 2007, Kara was awarded the TAXI A&R award for Humanitarian of the Year at their annual Road Rally Convention.[20]

DioGuardi appeared on an episode of Hannah Montana called "Judge Me Tender".

She is married to teacher-turned-general contractor Mike McCuddy; they wed on July 5, 2009 in Maine. [22] The two met while he was working on a home adjacent to her property in Maine. [23]

DioGuardi works with the Phoenix House, a non-profit substance abuse service organization; she contributes to recording studios in the facilities and helps teach the teens how to operate the equipment.[20]

This article uses material from the article Kara DioGuardi from the free encyclopedia Wikipedia and it is licensed under the GNU Free Documentation License.