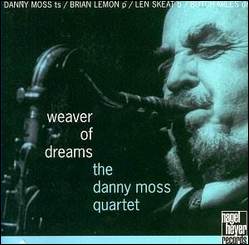 Dennis Moss MBE (16 August 1927 28 May 2008[1]) was a British jazz tenor saxophonist. He was known for playing with most of the high profile figures of British jazz, including Vic Lewis, Ted Heath, Johnny Dankworth, Alex Welsh, and Humphrey Lyttelton.[2]

The son of a toolmaker, Moss was born in Redhill, Surrey in 1927. At the age of thirteen, he saw a jazz band appear briefly in a Bowery Boys film on a family cinema visit, and was so inspired by the clarinet playing that he swapped his most valued possession, his ice skates, for a second-hand instrument of his own. Self-taught on both this and the tenor saxophone, which he took up at school,[1] he started playing professionally after leaving at the age of sixteen.

A spell of National Service at the age of eighteen saw Moss performing for three years in a Royal Air Force regional band. After leaving the forces he joined the Vic Lewis Orchestra, and in the next few years moved around various bands, especially ones with the potential for a soloist. In 1952, he joined Ted Heath's band, a well-paid role which he described as "the prestige job of all time". Soon, however, Moss found the group's focus on novelty numbers and faithful musical reproductions, including that of solos, to be limiting to his skills as an improviser, and he left after three years.[1]

In 1957 Moss joined John Dankworth's orchestra. Here, with the band's encouragement, he began to develop his characteristic saxophone sound, eschewing the contemporary focus on light tone and fast phrasing in favour of a thicker and more spacious sound informed by American pioneers such as Coleman Hawkins and Ben Webster.[2] When the Dankworth band visited America, Moss' style was singled out for compliment by Count Basie, who declared his playing "real Texas tenor... the way it should sound!"[1] He left Dankworth's band in 1962, as the band itself was winding down. From here, he joined Humphrey Lyttelton's group, where he continued to hone his style for another two years.

He then married jazz singer Jeanie Lambe, and the two moved from London to Sussex at her suggestion. Here, he formed his own quartet, playing a mix of club gigs, festival appearances and radio broadcasts for the BBC. He continued to tour with this quartet throughout the 1970s and 1980s, also playing and recording with high-profile singers like Tony Bennett, Ella Fitzgerald, Bing Crosby, Sarah Vaughan and Rosemary Clooney, and appearing as a guest soloist with American musicians such as Buck Clayton in the mid-'60s and Louis Armstrong on his last British tour. Moss also co-founded British jazz "supergroup" Pizza Express All-Stars in 1980, playing with them until the end of the 1980s.

Moss and Lambe moved to Perth, Australia in 1989, although Moss continued to play regularly in Europe;[2] indeed, his distance from Europe only seemed to increase the level of demand for his performances there.[1] Moss was appointed MBE in 1990.

In November 2005, he was diagnosed with pleural mesothelioma, a rare form of lung cancer caused by exposure to asbestos. He participated in a video for the Australian medical website Virtual Medical Centre where he was interviewed about his illness and chemotherapy treatment. He died on 28 May 2008, survived by Lambe and the couple's two sons one whose name is 'Danny Junior'.[1]

This article uses material from the article Danny Moss from the free encyclopedia Wikipedia and it is licensed under the GNU Free Documentation License.

I Let A Song Go Out Of My Heart Ernestine Anderson
Update Required To play the media you will need to either update your browser to a recent version or update your Flash plugin.