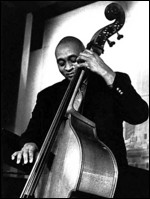 After playing trombone with school orchestras and army bands, Johnson switched to double bass, and started working with musicians such as Bill Barron and recording with Archie Shepp in the mid1960s, before joining Art Blakey's band for a month-long residency at the Five Spot Café in December 1965, and then going on to The Lighthouse nightclub in Hermosa Beach, California, where they recorded the live album, Buttercorn Lady, at the beginning of 1966,[1] with a line-up, comprising Blakey, Frank Mitchell, Chuck Mangione, Keith Jarrett, and Johnson.[2][3]

This article uses material from the article Reggie Johnson (musician) from the free encyclopedia Wikipedia and it is licensed under the GNU Free Documentation License.

Like Someone In Love Hank Jones
Update Required To play the media you will need to either update your browser to a recent version or update your Flash plugin.