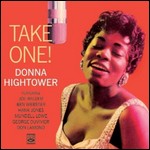 Donna Lubertha Hightower (December 28, 1926 August 19, 2013) was an American R&B, soul and jazz singer and songwriter, who recorded and released albums for the Decca and Capitol labels. Later in her career she was based in Europe, where she had a hit in 1972 with "This World Today is a Mess."

She was born in Caruthersville, Missouri, to a family of sharecroppers. She listened to singers such as Ella Fitzgerald, but never planned to have a singing career and by the age of 23 had been married, had two children, and divorced. While working in a diner in Chicago, she was heard singing by Bob Tillman, a reporter with the Chicago Defender newspaper, who then won her a booking as a singer at the Strand Hotel. Initially billed as Little Donna Hightower, she won a recording contract with Decca Records and recorded her first single, "I Ain't In The Mood", in 1951.[1][2]

During the mid 1950s she recorded R&B songs, for RPM Records, often accompanied by the Maxwell Davis Orchestra as on her 1955 version of "Hands Off". She toured widely in the US, with Louis Jordan, B. B. King, Johnny Mathis, Della Reese and others. However, none of her records made the pop or R&B charts. By 1958, her career had slowed and she began working for a music publishing firm in New York City, recording demonstration records of new songs. Her version of "Light of Love" — later recorded by Peggy Lee — was heard by record producer Dave Cavanaugh, and as a result of his interest she was signed to Capitol Records.[1][3] She recorded several albums for Capitol, including Take One! and Gee Baby, Ain't I Good To You?, both released in 1959.[4] While noted for her "range and power, [she] was equally compelling doing sentimental, soft ballads."[5]

In 1959, she performed in England, France, Sweden and elsewhere in Europe with Quincy Jones and The Platters. She settled in France and then, in the late 1960s, in Madrid. In 1971 she won the Costa del Sol International Song Festival, following which she began recording in Spain for Columbia Records, although her songs were issued in much of Europe by Decca Records.[6] She worked with singer Danny Daniel as a duo, Danny y Donna, and they had a hit in the country with "El Vals de las Mariposas". She also recorded solo, and her most successful record, "This World Today Is A Mess" ("Este Mundo es En Conflicto"), which she co-wrote, was an international hit — though not in the US, where it was not released, or in the UK — in 1972, reportedly selling over one million copies worldwide.[1][3] She is also known for the song "If You Hold My Hand", which was later sampled for the UK 2007 hit single "Handsfree" by Sonny J.[7][8]

She returned to the US to live in semi-retirement in Austin, Texas, in 1990. She was a member of Calvary Baptist Church, and appeared on local radio programs.[9] Her last performance in Spain was at a jazz festival in 2006. She died in Austin in 2013 at the age of 86.[3]

This article uses material from the article Donna Hightower from the free encyclopedia Wikipedia and it is licensed under the GNU Free Documentation License.

You're Nobody 'Till Somebody Loves You Jamie Cullum
Update Required To play the media you will need to either update your browser to a recent version or update your Flash plugin.