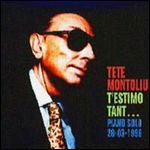 Vicenç Montoliu i Massana,[1] better known as Tete Montoliu (28 March 1933 – 24 August 1997) was a jazz pianist from Catalonia, Spain. Born blind, he learnt Braille music at age seven. His styles varied from hard bop, through afro-cuban, world fusion, to post bop. He recorded with Lionel Hampton in 1956 and played with saxophonist Roland Kirk in 1963. He also worked with leading American jazz musicians who toured in, or relocated to Europe including Kenny Dorham, Dexter Gordon, Ben Webster, Lucky Thompson, and Anthony Braxton. Tete Montoliu recorded two albums in the US, and recorded for Enja and Soul Note in Europe.[2]

Montoliu was born blind, in the Eixample district of Barcelona, and died in the same city. He was the only son of Vicenç Montoliu (a professional musician) and Àngela Massana, a jazz enthusiast, who encouraged her son to study piano. Montoliu's first experimenting with the piano took place under the tuition of Enric Mas at the private school for blind children that he attended from 1939 to 1944. In 1944, Montoliu's mother arranged for Petri Palou to provide him with formal piano lessons.

From 1946 to 1953 Montoliu studied music at the Conservatori Superior de Música de Barcelona, where he also met jazz musicians and became familiar with the idiom in jam sessions. During the early stages of his career, Montoliu was particularly influenced by the music of U.S. jazz pianist Art Tatum, although he soon developed a distinctive style. (Coincidentally, Tatum was also impaired with extremely limited vision). Montoliu began playing professionally at pubs in Barcelona, where he was noticed by Lionel Hampton on 13 March 1956. Montoliu toured with Hampton through Spain and France and recorded Jazz Flamenco, setting off a prolific international career.

In the 1960s, Montoliu played in various concerts at New York and established collaborations with drummer Elvin Jones and bassist Richard Davis. During the 1970s, Montoliu travelled extensively throughout Europe, consolidating his reputation as a main referent in the hard bop movement. During the 1980s, he played in numerous concerts, collaborating with jazz players such as Dexter Gordon, Johnny Griffin, George Coleman, Joe Henderson, Dizzy Gillespie, Chick Corea, Hank Jones, Roy Hargrove, Idris Muhammad and Jesse Davis, among others.

In 1996, shortly before his death, Spain paid public tribute to Montoliu for his fifty-year career in jazz.[3]

This article uses material from the article Tete Montoliu from the free encyclopedia Wikipedia and it is licensed under the GNU Free Documentation License.

Soul Sister Warren Wolf
Update Required To play the media you will need to either update your browser to a recent version or update your Flash plugin.