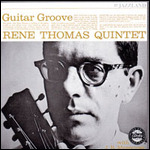 René Thomas (25 February 1927, Liege, Belgium 3 January 1975,[1] Spain) is considered one of the greatest jazz guitarists of the 1960s, but has remained rather unknown to the general public. After the Second World War, he played with the "Bop Shots", Belgium's first be-bop outfit with Jacques Pelzer and Bobby Jaspar. Between these three men a real musical osmosis arose.

In the early 1950s, Thomas moved to Paris where he connected with the modern jazz scene. In 1954, he recorded his first album under his own name. His reputation as a virtuoso guitarist and inventive musician spread rapidly in the small jazz world.

In 1956, he moved to Canada. He played regularly for the Montreal jazz society and met American musicians, including Sonny Rollins, who becomes impressed enough to invite him for a concert in Philadelphia and for the recording, in 1958, of his Sonny Rollins and the Big Brass album. In the United States, René played with the best jazz musicians of that era: Stan Getz, Miles Davis, Toshiko Akiyoshi and Jackie McLean. In 1960, he recorded the album Guitar Groove.

He died on 3 January 1975 of a sudden heart attack in Spain, while touring with Lou Bennett.

This article uses material from the article René Thomas (guitarist) from the free encyclopedia Wikipedia and it is licensed under the GNU Free Documentation License.

Finally Pathétique Jens Schöwings Blue Note Bach
Update Required To play the media you will need to either update your browser to a recent version or update your Flash plugin.