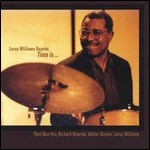 Williams first began playing drums as a teenager in the 1950s. From 1959 to the middle of the 1960s he played with Judy Roberts, and following this he moved to New York City and played with Booker Ervin in 1967. In 1968 he played with Sonny Rollins, Archie Shepp, and Clifford Jordan; in 1969 he first began playing with Barry Harris, with whom he would collaborate often. 1970 saw him playing with Hank Mobley, Wilbur Ware, and Thelonious Monk, the latter of which he went with on a tour of Japan. Later in the 1970s he played with Yusef Lateef, Ray Bryant, Charles McPherson, Stan Getz, Andrew Hill, Sonny Stitt, Junior Cook, Al Cohn, Buddy Tate, and Bob Wilber.

In the 1980s Williams played with Art Davis, Barry Harris, Tommy Flanagan, Steve Turre, and Bill Hardman. In the 1990s he performed with Anthony Braxton, Lee Konitz, Ralph Lalama, and Pete Malinverni. Most recently, he was a member of El Mollenium with Roni Ben-Hur, Bertha Hope, and Walter Booker.

This is not the Leroy Williams recorded with Son House in 1941.

This article uses material from the article Leroy Williams from the free encyclopedia Wikipedia and it is licensed under the GNU Free Documentation License.

Sweet Bossa Danny Jazz Trio
Update Required To play the media you will need to either update your browser to a recent version or update your Flash plugin.