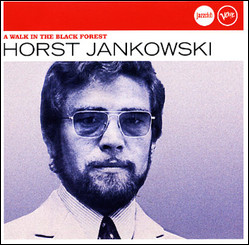 Born in Berlin,[1] Jankowski studied at the Berlin Music Conservatory and played jazz in Germany in the 1950s, serving as bandleader for singer Caterina Valente.

Jankowski's fame as a composer of easy listening pop peaked in 1965 with his tune "Eine Schwarzwaldfahrt", released in English as "A Walk in the Black Forest". The tune became a pop hit, reaching #1 on the US easy listening chart,[2] #12 on the US Billboard Hot 100,[3] and #3 on the UK Singles Chart.[4] It sold over one million copies, and was awarded a gold disc.[5] The track was featured on the BBC's review of the 1960s music scene, Pop Go The Sixties, broadcast on BBC One and ZDF, on December 31, 1969. It can be heard years before 1965 in episodes of Perry Mason.

The Genius of Jankowski album, released in 1965, was also a million seller.[5] This track has become a signature song at Plymouth Argyle F.C., being played at the end of each game as the fans leave the grounds. The song also featured as a running joke in the episode Radio Goodies of the 1970s BBC TV series The Goodies, as the only record possessed by the group's radio station. Jankowski went on to score a string of successful albums, but moved on in the 1970s to concentrate more on jazz, including covers of pop and rock hits.[6] Between 1989 and 1994 Jankowski composed and performed easy listening music for Sonoton, Germany.

This article uses material from the article Horst Jankowski from the free encyclopedia Wikipedia and it is licensed under the GNU Free Documentation License.

Woke up this morning Philipp Fankhauser
Update Required To play the media you will need to either update your browser to a recent version or update your Flash plugin.