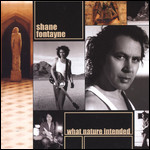 Shane Fontayne (born May 10, 1954, London) is the professional name of English rock guitarist Mick Barakan. Active since the 1970s, he was the guitarist for Bruce Springsteen during the 1992-1993 "Other Band" Tour, as Springsteen had disbanded his own E Street Band three years earlier.[1] During his career he has worked with Ian Hunter, Van Zant, John Waite, Chris Botti, Joe Cocker, Johnny Hallyday, Marc Cohn, Randy VanWarmer, and others.[2]

In 1970s he was associated with Byzantium, an English psychedelic music band, and over the years has worked with artists like, Steve Forbert (Little Stevie Orbit, 1980 album), Maria McKee (Maria McKee (1989 album) and later Joe Cocker (Heart & Soul, 2004 album), Richard Marx (My Own Best Enemy, 2004 album).

He has also been the guitarist for the French rocker Johnny Hallyday for his 1995 tour "Lorada tour", and 1996 concert in Las Vegas. In addition, Fontayne has been singer/songwriter Marc Cohn's touring guitarist since 1998. He has recently worked with Crosby, Stills & Nash on tour.

On December 2, 2012 Fontayne played lead electric guitar for Ann and Nancy Wilson's version of "Stairway to Heaven" during the Kennedy Center Honors ceremony for Led Zeppelin.[3]

Fontayne was married to actress MacKenzie Phillips from 1996 to 2000, and has a son with her, born in 1987. Fontayne's older brother, Peter Barakan, is a well known music critic in Japan.[4][5]

This article uses material from the article Shane Fontayne from the free encyclopedia Wikipedia and it is licensed under the GNU Free Documentation License.

Reptile Eric Clapton
Update Required To play the media you will need to either update your browser to a recent version or update your Flash plugin.