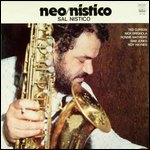 Associated for many years with Woody Herman's Herd,[1] Nistico played in the 1962–65 group, considered one of the Herman's best lineups,[2] alongside Phil Wilson, Bill Chase, Nat Pierce and Jake Hanna.

He started playing alto sax, switching to tenor in 1956, starting out on a Buescher before switching to a Conn 10M tenor saxophone,[3] and briefly played baritone sax. From 1959 to 1961, Nistico played with Chuck Mangione's Gap Brothers band.[4]

In 1965, he joined Count Basie but returned on many occasions to play with Herman. Around that time he was also a member of Dusko Goykovich's sextet, together with other musicians associated with the Herd such as Carl Fontana, Nat Pierce, and Michael Moore. He also played with Nat Adderley, Don Ellis, Stan Tracey, Chuck Mangione and Buddy Rich.

Nistico's solo work contrasts his big band work. His solo work is more oriented towards bebop, as heard on the Heavyweights recording on Riverside Records..

This article uses material from the article Sal Nistico from the free encyclopedia Wikipedia and it is licensed under the GNU Free Documentation License.

Oh, What A Beautiful Morning André Previn
Update Required To play the media you will need to either update your browser to a recent version or update your Flash plugin.