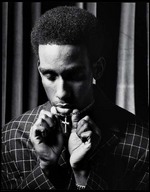 Shawn Patrick Stockman (born September 26, 1972) is an American R&B singer, best known as a member of the vocal group Boyz II Men.[1] He is also a judge on the television show The Sing-Off, alongside Sara Bareilles and Ben Folds.

Stockman recorded a solo album as a side project during the late 1990s, but the LP was never released. He has written the songs "Forever", "Hot Thing", and "Let It Go"; the latter of which was played during the Disney movie Seventeen Again.

Shawn wrote and sang the song "Visions of a Sunset" for the Mr. Holland's Opus film soundtrack. He got his singing start with the Philadelphia Boys Choir & Chorale at the age of 8.[2]

Most recently, Stockman started his own record label called Soul Chemistry Projects. It was hoped that his ability to find and groom new talent will launch the label to success, although none of his charges has scored a major distribution deal. He also opened a small recording studio in Toledo, Ohio, his wife's hometown.

Whilst many people may be expecting the label to have a smooth R&B feel reflecting Boyz II Men's style, the talent may prove otherwise. It currently has hip hop and R&B artists signed, but Stockman says he does not put musical limits on who can and can not be signed. Shawn says that he is a musician and likes all genres of music.

He is married to Sharonda Jones and together they have fraternal twins Ty Stockman and Micah Stockman in 2003.They had recently had their third child daughter Brooklyn Stockman.

Most recently, he's recorded a cover of Beyoncé Knowles' hit song "If I Were a Boy".[3]

Shawn has been serving as a judge along with Ben Folds, Nicole Scherzinger, and Sara Bareilles on NBC's "The Sing Off" with host Nick Lachey. The show first premiered on December 14, 2009, the second season premiered on December 6, 2010, and the third season winner was announced on November 28, 2011.

This article uses material from the article Shawn Stockman from the free encyclopedia Wikipedia and it is licensed under the GNU Free Documentation License.

I'm Glad There Is You Stewy von Wattenwyl
Update Required To play the media you will need to either update your browser to a recent version or update your Flash plugin.