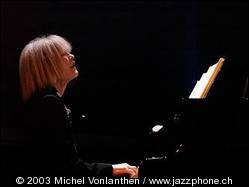 Carla Bley (born Lovella May Borg, May 11, 1936) is an American jazz composer, pianist, organist and bandleader. An important figure in the free jazz movement of the 1960s, she is perhaps best known for her jazz opera Escalator over the Hill (released as a triple LP set), as well as a book of compositions that have been performed by many other artists, including Gary Burton, Jimmy Giuffre, George Russell, Art Farmer, John Scofield and her ex-husband Paul Bley.

Bley was born in Oakland, California to Emil Borg (1899-1990), a piano teacher and church choirmaster, who encouraged her to sing and to learn to play the piano, and Arline Anderson (1907-1944), who died when Bley was 8 years old. After giving up the church to immerse herself in roller skating at the age of fourteen,[1] she moved to New York at seventeen and became a cigarette girl at Birdland, where she met jazz pianist Paul Bley. She toured with him under the name Karen Borg, before she changed her name in 1957 to Carla Borg and married Paul Bley the same year adapting the Bley name.[2] He encouraged her to start composing.[3] The couple later divorced but she kept his surname professionally.[4]

A number of musicians began to record Bley's compositions: George Russell recorded "Bent Eagle" on his 1960 release Stratusphunk in 1960; Jimmy Giuffre recorded "Ictus" on his album Thesis; and Paul Bley's Barrage consisted entirely of her compositions. Throughout her career Bley has thought of herself as a writer first, once describing herself as 99 percent composer and one percent pianist.[5]

In 1964 she was involved in organising the Jazz Composers Guild which brought together the most innovative musicians in New York at the time.[3] She then had a personal and professional relationship with Michael Mantler, with whom she had a daughter, Karen, now also a musician in her own right. Bley and Mantler were married from 1965-91. With Mantler, she co-led the Jazz Composers' Orchestra and started the JCOA record label which issued a number of historic recordings by Clifford Thornton, Don Cherry and Roswell Rudd, as well as her own magnum opus Escalator Over The Hill and Mantler's The Jazz Composer's Orchestra LPs. Bley and Mantler followed with WATT Records, which has issued their recordings exclusively since the early 1970s. Bley and Mantler were pioneers in the development of independent artist-owned record labels and also started the now defunct New Music Distribution Service which specialized in small, independent labels that issued recordings of "creative improvised music".

Bley has collaborated with a number of other artists, including Jack Bruce, Robert Wyatt and Pink Floyd drummer Nick Mason, whose 1981 solo album Nick Mason's Fictitious Sports was a Carla Bley album in all but name. She arranged and composed music for Charlie Haden's Liberation Music Orchestra, and wrote A Genuine Tong Funeral for Gary Burton. Her arrangement of the score for Federico Fellini's 8½ appeared on Hal Willner's Nino Rota tribute record, Amarcord Nino Rota. She contributed to other Willner projects, including the song "Misterioso" for the tribute to Thelonious Monk entitled That's the Way I Feel Now, which included Johnny Griffin on tenor saxophone, and the Willner-directed tribute to Kurt Weill, entitled Lost in the Stars, where she and her band contributed an arrangement of the title track, with Phil Woods on alto saxophone. In the late 1980s, she also performed with Anton Fier's Golden Palominos and played on their 1985 album, Visions of Excess.

She has continued to record frequently with her own big band, which has included Blood, Sweat and Tears' notable Lew Soloff, and a number of smaller ensembles, notably the Lost Chords. Her current partner, the bassist Steve Swallow,[6] has been her closest and most consistent musical associate in recent years and the two have recorded several duet albums. In 1997, a live version of Escalator over the Hill (re-orchestrated by Jeff Friedman) was performed for the first time in Cologne, Germany; in 1998 Escalator toured Europe, and another live performance took place in May 2006 in Essen, Germany.

In 2005 she arranged the music for and performed on Charlie Haden's latest Liberation Music Orchestra tour and recording, Not in Our Name. She lives in Woodstock, New York.[7]

This article uses material from the article Carla Bley from the free encyclopedia Wikipedia and it is licensed under the GNU Free Documentation License.

Eleven Feels Like Heaven Mo' Blow
Update Required To play the media you will need to either update your browser to a recent version or update your Flash plugin.