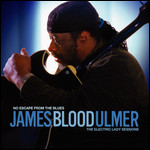 James "Blood" Ulmer (born February 8, 1940) is an American jazz, free funk and blues guitarist and singer. Ulmer plays a Gibson Byrdland guitar. His distinctive guitar sound has been described as "jagged" and "stinging". Ulmer's singing has been called "raggedly soulful".[1]

Willie James Ulmer[2] was born in St. Matthews, South Carolina. He began his career playing with various soul jazz ensembles, first in Pittsburgh, Pennsylvania, from 1959–1964, and then in the Columbus, Ohio region, from 1964–1967. He first recorded with organist Hank Marr in 1964 (released 1967). After moving to New York in 1971, Ulmer played with Art Blakey's Jazz Messengers, Joe Henderson, Paul Bley, Rashied Ali and Larry Young.

In the early 1970s, Ulmer joined Ornette Coleman; he was the first electric guitarist to record and tour extensively with Coleman. He has credited Coleman as a major influence, and Coleman's strong reliance on electric guitar in his fusion-oriented recordings owes a distinct debt to Ulmer.

His appearance on Arthur Blythe's two consecutive Columbia albums, Lenox Avenue Breakdown and Illusions, was followed by Ulmer's signing to that label. That resulted in three albums: Free Lancing, Black Rock, and 1983's Odyssey, which was the inaugural release of his Odyssey The Band with drummer Warren Benbow and violinist Charles Burnham, a trio that has continued to perform and record to this day. It was described at the time as "avant-gutbucket", leading writer Bill Milkowski to describe the music as "conjuring images of Skip James and Albert Ayler jamming on the Mississippi Delta."

He formed a group called the Music Revelation Ensemble circa 1980, initially co-led with David Murray for the first decade, that lasted into the mid-90s. Later recorded incarnations of the group featured either Arthur Blythe, Sam Rivers, Pharoah Sanders or John Zorn on saxophones. In the 1980s he co-led, with saxophonist George Adams, the Phalanx quartet.

Ulmer has recorded many albums as a leader, including a recent quartet of acclaimed blues-oriented records produced by Vernon Reid: Memphis Blood, No Escape from the Blues, Bad Blood in the City, and the solo guitar & vocals album Birthright.

Ulmer was a judge for the 8th annual Independent Music Awards to support independent artists.[3][4]

In a 2005 Down Beat interview, Ulmer opined that guitar technique had not advanced since the death of Jimi Hendrix.[5] He stated that technique could advance "if the guitar would stop following the piano," and indicated that he tunes all of his guitar strings to A.[5]

In 2009, Ulmer started his own label, American Revelation, on which he has released four CDs, which are available only from his website or at his shows.

In spring 2011, Ulmer joined saxophone luminary James Carter's organ trio as a special guest along with Nicholas Payton on trumpet for a six-night stand of performances at Blue Note New York.

With Odyssey the Band

With members of Rip Rig + Panic

This article uses material from the article James Blood Ulmer from the free encyclopedia Wikipedia and it is licensed under the GNU Free Documentation License.