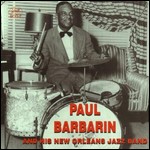 Adolphe Paul Barbarin[1] (May 5, 1899 February 17, 1969)[2][3][4] was a New Orleans jazz drummer, usually regarded (along with Baby Dodds) as one of the very best of the pre-Big Band era jazz drummers. He studied under the famed drummer, Louis Cottrell, Sr.

Paul Barbarin's year of birth is often given as 1901, but his brother Louis Barbarin (born 1902) said he was quite sure that Paul was several years older than he was, and Paul Barbarin simply refused to answer the year of his birth in an interview at Tulane's Jazz Archives.

From the late 1910s on, Barbarin divided his time between Chicago, New York City and New Orleans, and touring with such bands as those of Joe "King" Oliver, Luis Russell, Louis Armstrong, and Henry Red Allen. From the 1950s on he usually led his own band. He, along with Louis Cottrell, Jr. founded and led the second incarnation of the Onward Brass Band from 1960 to 1969.

Barbarin was an accomplished and knowledgeable musician, a member of ASCAP, and the composer of a number of pop tunes and Dixieland standards, including "Come Back Sweet Papa", "Don't Forget to Mess Around (When You're Doing the Charleston)", "Bourbon Street Parade", and "(Paul Barbarin's) Second Line".

This article uses material from the article Paul Barbarin from the free encyclopedia Wikipedia and it is licensed under the GNU Free Documentation License.

Sundown B.B. And J.M. Trio
Update Required To play the media you will need to either update your browser to a recent version or update your Flash plugin.