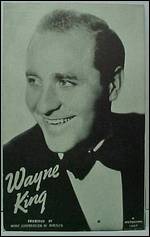 Wayne King (February 16, 1901 July 16, 1985) was an American musician, songwriter, singer and orchestra leader with a long association with both NBC And CBS. He was sometimes referred to as the Waltz King because much of his most popular music involved waltzes; "The Waltz You Saved For Me" was his standard set closing song in live performance and on numerous radio broadcasts at the height of his career.

Born Harold Wayne King in Savanna, Illinois, King was an impressive athlete in high school, and briefly played professional football with the Canton Bulldogs. He also attended Valparaiso University in Indiana for two years, but left to begin a career in music.

After playing saxophone for the Paul Whiteman Orchestra, he created "Wayne King and Orchestra" in 1927. King's innovations included converting Carrie Jacobs-Bond's "I Love You Truly" from its original 2/4 time over to 3/4.[1]

The orchestra disbanded during World War II, and King joined the army, advancing to the rank of major. The orchestra was reestablished in 1946.

In later years he operated a black angus cattle farm and a car rental business. In early 1958 he appeared as a guest challenger on the TV panel show To Tell The Truth.

He released a Christmas album on Decca Records, Have Yourself a Merry Little Christmas, in 1963.

King's orchestra played its last engagement in March 1983 at the Van Wezel Performing Arts Hall in Sarasota, Florida. Wayne was honored in his hometown of Savanna, with a sign acknowledging that he was a resident of the town.

King died in July 1985 and his body was cremated after his death. His wife Dorothy Janis kept his urn with her for the rest of her life until her death from natural causes at age 98 on March 10, 2010.[4] When she was laid to rest in the All Saints Episcopal Church Cemetery in Phoenix, Arizona his urn was placed into her casket by request when she was interred in March 2010.[5]

This article uses material from the article Wayne King from the free encyclopedia Wikipedia and it is licensed under the GNU Free Documentation License.

Canzòn da la Lüna Cojazz meets Bruno Spoerri
Update Required To play the media you will need to either update your browser to a recent version or update your Flash plugin.