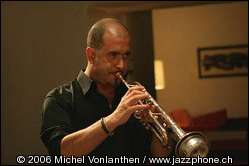 Flavio Boltro (born May 5, 1961) is an Italian trumpet and flugelhorn jazz player.

From 1982 to 1985, he plays regularly with Turin's Symphonic Orchestra and the RAI Symphonic Orchestra (Italian TV network). He begins these first jazz gigs with Steve Grossman, Cedar Walton and Billy Higgins in several clubs and major festivals. From 1984 to 1986, he participates in the "Linguomania Quintet" of Maurizio Giammarco, with Roberto Gatto on drums, Furio Di Castri on bass, Maurizio Giammarco on sax and Umberto Fiorentino on guitar (Reverberi CD). In 1986, the Italian newspaper " Musica Jazz" gave him the award of "Best musician" of the year. From this time, he played with legendary musicians as Freddie Hubbard, Clifford Jordan, Jimmy Cobb, Bob Berg, Dave Liebman, Don Cherry. In 1987 another jazz band is decisive in his musical career : the original trio with Manu Roche on drums and Furio Di Castri on bass which is converted in quartet with the venue of Joe Lovano (Imagine CD). In 1992, he released his first album as a leader: “Flabula”.

In 1994, Flavio Boltro and his friend Stefano di Battista (saxophonist) enters the French “Orchestre Nationnal de Jazz” conduct by Laurent Cugny. From 1996 to 2000, Michel Petrucciani engaged Flavio in his sextet, which will tour all around the world (Both Worlds CD). In 1997, Flavio participated at the very noticed quintet" Di Battista/Boltro" with Eric Legnini on piano, Benjamin Henocq on drums and Rosario Bonaccorso on bass ("Volare" CD). In 2000, he enters the quintet of the avant-gardist Michel Portal up 2005. He played also with Laurent de Wilde. He released two CDs as a leader with Blue Note Records (EMI): "Road Runner" in 1999 and "40 degrés" in 2003. Then in 2003, he participated at the very original TRIO AIR with Giovanni Mirabassi on piano and Glen Ferris on trombone. The album Air get the award of " Best album of the year 2003 " from the French Académie du Jazz.[1]

From 2005 to 2009, he played with the quintet of the Italian saxophonist Rosario Giuliani in " Anything Else" CD (Dreyfus).

In 2008, he created an innovative and sharp new quartet with Giovanni Mazzarino (piano), Marco Mitchelli (bass) and Francesco Sotgiu (drums). A CD is available since January 2010 with the cooperation of the Italian newspaper "L'Espresso".

In 2011, the German label ACT Music released "Opera at Schloss Elmau" in which Flavio Boltro and the Italian pianist Danilo Rea play famous arias from the Italian Opera.

This article uses material from the article Flavio Boltro from the free encyclopedia Wikipedia and it is licensed under the GNU Free Documentation License.