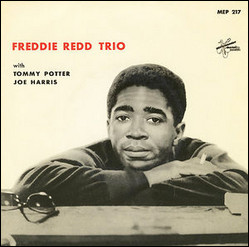 Redd was born and grew up in New York City; after losing his father at the age of one, he was raised by his mother, who moved around Harlem, Brooklyn and other neighborhoods. An autodidact, he began playing the piano at a young age and took to studying jazz seriously upon hearing Charlie Parker during his military service in Korea in the late-1940s.

Redd's most successful project was in the late 1950s when he was invited to compose the music for The Living Theatre's New York stage production of The Connection, which was also used in the subsequent 1961 film. In both play and film he performed as an actor and musician. The theater production was a modest hit and the troupe toured the United States and Europe, performing in New York City, London, and Paris. Redd also led a Blue Note album of his music for the play, which featured Jackie McLean on alto sax. Redd's success in the theater production, however, did not advance his career in the United States, and shortly afterwards he moved to Europe, spending time in Denmark and France.

He returned to the United States in 1974 and resettled on the West Coast; he became a regular on the San Francisco scene and recorded intermittently until 1990. In 2011, he resettled in Baltimore, where he still resides.

Redd has always struggled to establish himself commercially, however musically, his creative lines, particular voicings and innovative compositions have solidified his reputation; he has worked with such musicians as Jackie McLean, Tina Brooks, Paul Chambers, Howard McGhee, Milt Hinton, Lou Donaldson, Benny Bailey, Charles Mingus, Louis Hayes, Al McKibbon, Billy Higgins, Osie Johnson, Tommy Potter, and Joe Chambers, among others. He even contributed organ to James Taylor's original 1968 recording of "Carolina in My Mind". Redd recorded several albums as leader, including two other Blue Note albums (although the last of these was not issued for many years). He most recently completing a European tour in 2013.