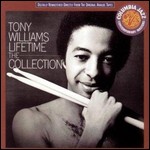 Widely regarded as one of the most important and influential jazz drummers to come to prominence in the 1960s, Williams first gained fame in the band of trumpeter Miles Davis and was a pioneer of jazz fusion.[1] He is also considered the inventor of the blast beat,[2] a technique that would become an important element of punk rock and heavy metal drumming.

Williams was born in Chicago and grew up in Boston. He was of African, Portuguese, and Chinese descent.[3] He began studies with drummer Alan Dawson at an early age, and began playing professionally at the age of 13 with saxophonist Sam Rivers. Saxophonist Jackie McLean hired Williams when he was 16. At 17 Williams found considerable fame with Miles Davis, joining a group that was later dubbed Davis's Second Great Quintet. Williams was a vital element of the group, called by Davis in his autobiography "the center that the group's sound revolved around."[4] His inventive playing helped redefine the role of jazz rhythm section through the use of polyrhythms and metric modulation (transitioning between mathematically related tempos and/or time signatures).

Williams was an integral participant in the early- to mid-1960s avant-garde movement, playing on such classics as Jackie McLean's One Step Beyond, Grachan Moncur III's Evolution and Some Other Stuff, Sam Rivers's Fuchsia Swing Song, Andrew Hill's Point of Departure, and Eric Dolphy's Out to Lunch. His first album as a leader, 1964's Life Time, was also in the avant-garde vein. Many of these progressive albums are considered among the greatest jazz recordings of all time.

In 1969, he formed a trio, The Tony Williams Lifetime, with John McLaughlin on guitar, and Larry Young on organ. Lifetime was a pioneering band of the fusion movement, a combination of rock, R&B, and jazz. Their first album, Emergency!, was largely rejected by the jazz community at the time of its release. Today, Emergency! is considered by many to be a fusion classic. His second fusion recording, also on Polydor Records, was Turn It Over, which was more of a statement of the current events of the period and was even more progressive and louder, with the addition of rock bassist and singer Jack Bruce.

In mid-1976, Williams was a part of a reunion of sorts with his old Davis band compatriots: pianist/keyboardist Herbie Hancock, bassist Ron Carter, and tenor saxophonist Wayne Shorter. Davis was in the midst of a six-year hiatus and was replaced by Freddie Hubbard. The record was later released as V.S.O.P. and was highly instrumental in increasing the popularity of acoustic jazz. The group went on to tour and record for several years, releasing a series of live albums under the name "V.S.O.P." or "The V.S.O.P. Quintet".

In 1979, Williams, McLaughlin and bassist Jaco Pastorius united for a one-time performance at the Havana Jazz Festival. This trio came to be known as the Trio of Doom, and a recording of their performance was released in 2007. It opens with a powerful drum improvisation by Williams, followed by McLaughlin's "Dark Prince" and Pastorius' "Continuum", Williams' original composition "Para Oriente" and McLaughlin's "Are You the One?"

With the group Fuse One, Williams released two albums in 1980 and 1982.[5] In 1985, he recorded an album for Blue Note Records entitled Foreign Intrigue, which featured the playing of pianist Mulgrew Miller and trumpeter Wallace Roney. Later that year he formed a quintet with Miller, Roney, saxophonist Bill Pierce, and bassist Charnett Moffett (later Ira Coleman). This band played Williams' compositions almost exclusively (the LennonMcCartney song "Blackbird", the standard "Poinciana", and the Freddie Hubbard blues "Birdlike" being the exceptions) and toured and recorded throughout the remainder of the 1980s and into the early 1990s. This rhythm section also recorded as a trio.

Williams also played drums for the band Public Image Limited, fronted by former Sex Pistols singer John Lydon, on their 1986 release album/cassette/compact disc (the album title varied depending on the format). He played on the songs "FFF", "Rise" (a modest hit), and "Home". Bass guitarist Bill Laswell co-wrote those three songs with Lydon. The other drummer on that album was Ginger Baker, who had played in Cream with Bruce.

Williams lived and taught in the San Francisco Bay Area until his death from a heart attack following routine gall bladder surgery. One of his final recordings was The Last Wave by the trio known as Arcana, a release organized by Laswell.

Williams played traditional grip as well as other American and European grips.

With Jonas Hellborg and the Soldier String Quartet

With Jaco Pastorius and John McLaughlin

This article uses material from the article Tony Williams (drummer) from the free encyclopedia Wikipedia and it is licensed under the GNU Free Documentation License.