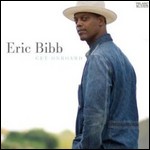 Bibb's father, Leon,[2] was a musical theatre singer, who made a name for himself as part of the 1960s New York folk scene; his uncle was the jazz pianist and composer John Lewis, of the Modern Jazz Quartet. Family friends included Pete Seeger, and actor/singer/activist Paul Robeson, Bibb's godfather.[3]

He was given his first steel-string acoustic guitar at age seven. Growing up surrounded by talent, he recalls a childhood conversation with Bob Dylan, who, on the subject of guitar playing, advised the 11-year-old Bibb to "Keep it simple, forget all that fancy stuff" (as recounted in "The Transatlantic Sessions 5" program and DVD from the BBC).

I would cut school and claim I was sick. When everyone would leave the house I would whip out all the records and do my own personal DJ thing all day long, playing Odetta, Joan Baez, the New Lost City Ramblers, Josh White.[4]

When Bibb was 16 years old, his father invited him to play guitar in the house band for his TV talent show Someone New. Bill Lee, who played bass in this band, later appeared on Bibb's albums Me To You and Friends. In 1969, Bibb played guitar for the Negro Ensemble Company at St. Mark's Place in New York.

He went on to study psychology and Russian at Columbia University, but did not finish these studies. The next year, aged 19, he left for Paris, where he met guitarist Mickey Baker who focused his interest on blues guitar.[5][6][7]

Bibb moved to Stockholm, where he immersed himself in pre-war blues and the newly discovered world music scene, while he continued to write and perform. Good Stuff was released in 1997 on Opus 3 and the American label Earthbeat. Bibb signed to the British-based Code Blue label, but only released one album, Me to You, featuring appearances from some of his personal heroes, Pops and Mavis Staples, and Taj Mahal. This was followed by tours of the UK, US, Canada, France, Sweden and Germany.

In the late 1990s Bibb joined forces with his then manager Alan Robinson to form Manhaton Records in Britain. The albums Home to Me (1999), Roadworks (2000) and Painting Signs (2001) followed, as did the 2005 releases for Opus 3, Just Like Love and Spirit & the Blues (Hybrid SACD of 1999 Earthbeat release). After that, he made A Family Affair (2002) with his father, Leon Bibb. This was followed by Natural Light, then Friends, which contained 15 tracks featuring Bibb duetting with friends and musicians he had met on his travels such as Taj Mahal, Odetta, Charlie Musselwhite, Guy Davis, Mamadou Diabate and Djelimady Toukara.[8][9]

In 2004, Eric Bibb released Friends as his debut release under Telarc International Corporation. Bibb remained with Telarc Records from 2004 until 2011, releasing several additional albums including, A Ship Called Love in 2005, Diamond Days in 2007, and Spirit I Am in 2008. He released Booker's Guitar in January 2010 with music channeled from the Delta guitar master himself, Booker White, also known as Bukka White. In November 2011, Bibb signed to Stony Plain Records.[10] In 2018, Bibb opened for George Benson on his UK tour.

This article uses material from the article Eric Bibb from the free encyclopedia Wikipedia and it is licensed under the GNU Free Documentation License.

Little Linda Spyro Gyra
Update Required To play the media you will need to either update your browser to a recent version or update your Flash plugin.