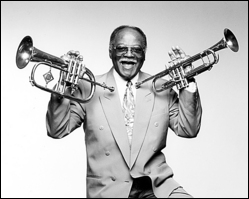 He played with Charlie Barnet (1947), Count Basie (1948–51),[3] Duke Ellington (1951–59),[3] Quincy Jones (1960), and Oscar Peterson (1964-96). He was also with The Tonight Show Band from 1962 to 1972. Terry's career in jazz spanned more than 70 years, during which he became one of the most recorded jazz musicians ever, appearing on over 900 recordings. Terry also mentored many musicians including Quincy Jones, Miles Davis, Herbie Hancock, Wynton Marsalis, Pat Metheny, Dianne Reeves, and Terri Lyne Carrington among thousands of others.[4]

Terry was born to Clark Virgil Terry Sr. and Mary Terry in St. Louis, Missouri, on December 14, 1920.[1][3] He attended Vashon High School and began his professional career in the early 1940s, playing in local clubs. He served as a bandsman in the United States Navy during World War II. His first instrument was valve trombone.[5]

Blending the St. Louis tone with contemporary styles, Terry's years with Basie and Ellington in the late 1940s and 1950s established his prominence. During his period with Ellington, he took part in many of the composer's suites and acquired a reputation for his wide range of styles (from swing to hard bop), technical proficiency, and good humor. Terry influenced musicians including Miles Davis and Quincy Jones, both of whom acknowledged Terry's influence during the early stages of their careers. Terry had informally taught Davis while they were still in St Louis,[6] and Jones during Terry's frequent visits to Seattle with the Count Basie Sextet.[7]

After leaving Ellington in 1959, Clark's international recognition soared when he accepted an offer from the National Broadcasting Company (NBC) to become a staff musician. He appeared for ten years on The Tonight Show as a member of the Tonight Show Band until 1972, first led by Skitch Henderson and later by Doc Severinsen, where his unique "mumbling" scat singing led to a hit with "Mumbles".[8] Terry was the first African American to become a regular in a band on a major US television network. He said later: "We had to be models, because I knew we were in a test.... We couldn't have a speck on our trousers. We couldn't have a wrinkle in the clothes. We couldn't have a dirty shirt."[9]

Terry continued to play with musicians such as trombonist J. J. Johnson and pianist Oscar Peterson,[10] and led a group with valve-trombonist Bob Brookmeyer that achieved some success in the early 1960s. In February 1965, Brookmeyer and Terry appeared on BBC2's Jazz 625.[11] and in 1967, presented by Norman Granz, he was recorded at Poplar Town Hall, in the BBC series Jazz at the Philharmonic, alongside James Moody, Dizzy Gillespie, Coleman Hawkins, Benny Carter, Teddy Wilson, Bob Cranshaw, Louie Bellson and T-Bone Walker.[12]

In the 1970s, Terry concentrated increasingly on the flugelhorn, which he played with a full, ringing tone. In addition to his studio work and teaching at jazz workshops, Terry toured regularly in the 1980s with small groups (including Peterson's) and performed as the leader of his Big B-A-D Band (formed about 1970). After financial difficulties forced him to break up the Big B-A-D Band, he performed with bands such as the Unifour Jazz Ensemble. His humor and command of jazz trumpet styles are apparent in his "dialogues" with himself, on different instruments or on the same instrument, muted and unmuted.

From the 1970s through the 1990s, Terry performed at Carnegie Hall, Town Hall, and Lincoln Center, toured with the Newport Jazz All Stars and Jazz at the Philharmonic, and was featured with Skitch Henderson's New York Pops Orchestra. In 1998, Terry recorded George Gershwin's "Let's Call the Whole Thing Off" for the Red Hot Organization's compilation album Red Hot + Rhapsody, a tribute to George Gershwin, which raised money for various charities devoted to increasing AIDS awareness and fighting the disease.

In the 1980s he was a featured soloist performing in front of the band. In November 1980, he was a headliner along with Anita O'Day, Lionel Hampton and Ramsey Lewis during the opening two-week ceremony performances celebrating the short-lived resurgence of the Blue Note Lounge at the Marriott O'Hare Hotel near Chicago.

Prompted early in his career by Billy Taylor, Clark and Milt Hinton bought instruments for and gave instruction to young hopefuls, which planted the seed that became Jazz Mobile in Harlem. This venture tugged at Terry's greatest love: involving youth in the perpetuation of jazz. From 2000 onwards, he hosted Clark Terry Jazz Festivals on land and sea, held his own jazz camps, and appeared in more than fifty jazz festivals on six continents. Terry composed more than two hundred jazz songs and performed for seven U.S. Presidents.[13]

In February 2004, Terry guest starred as himself, on Little Bill, a children's television series. Terry was a resident of Bayside, Queens, and Corona, Queens, New York, later moving to Haworth, New Jersey, and then Pine Bluff, Arkansas.[14][15]

His autobiography was published in 2011[4] and, as Taylor Ho Bynum writes in The New Yorker, "captures his gift for storytelling and his wry humor, especially in chronicling his early years on the road, with struggles through segregation and gigs in juke joints and carnivals, all while developing one of most distinctive improvisational voices in music history."[16]

In April 2014, a documentary Keep on Keepin' On, follows Clark Terry over four years to document the mentorship between Terry, and 23-year-old blind piano prodigy Justin Kauflin, as the young man prepares to compete in an elite, international competition.[17]

According to his own website Terry was "one of the most recorded jazz artists in history and had performed for eight American Presidents."[18]

In December 2014 the Jazz at Lincoln Center Orchestra with Wynton Marsalis and Cécile McLorin Salvant visited Terry, who had celebrated his 94th birthday on December 14, at the Jefferson Regional Medical Center. A lively rendition of "Happy Birthday" was played.[19]

Writing in The New York Times, Peter Keepnews said Terry "was acclaimed for his impeccable musicianship, loved for his playful spirit and respected for his adaptability. Although his sound on both trumpet and the rounder-toned flugelhorn (which he helped popularize as a jazz instrument) was highly personal and easily identifiable, he managed to fit it snugly into a wide range of musical contexts."[23]

Writing in UK's The Daily Telegraph, Martin Chilton said: "Terry was a music educator and had a deep and lasting influence on the course of jazz. Terry became a mentor to generations of jazz players, including Miles Davis, Wynton Marsalis and composer-arranger Quincy Jones."[9]

Interviewing Terry in 2005, fellow jazz trumpeter Scotty Barnhart said he was "... one of the most incredibly versatile musicians to ever live ... a jazz trumpet master that played with the greatest names in the history of the music ..."[24]

Southeast Missouri State University hosts the Clark Terry/Phi Mu Alpha Jazz Festival, an annual tribute to the musician. The festival began in 1998, and has grown in size every year. The festival showcases outstanding student musicians and guest artists at the university's River Campus.[25][26]

Over 250 awards, medals and honors, including:

This article uses material from the article Clark Terry from the free encyclopedia Wikipedia and it is licensed under the GNU Free Documentation License.

Lullaby Of The Leaves Benny Goodman Sextet
Update Required To play the media you will need to either update your browser to a recent version or update your Flash plugin.