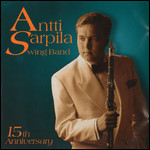 He formerly performed in a Benny Goodman-inspired style, and studied under Bob Wilber, and he was part of the «Tribute to Benny Goodman» (Carnegie Hall, 1988), and later figured in six tours of the USA. Later, he performed at the Oslo Jazzfestival 2006, together with Stokstad/Jensen Trad.Band.

His own A. S. Swing Band was established in 1982, and has released over ten albums. An anniversary DVD, 20th Anniversary Concert live at Finlandia Hall was released in 2002. With the Swedish Swing Society he also performed at Carnegie Hall in 2000. In a quartet with Lars Erstrand, Mark Shane and Björn Sjödin he performed A sailboat in the moonlight (2004) and We've got a heartful of music (2004). In the same year, he was a guest of Gerhard Aspheim's «Oldtimers» celebrating a 25 year anniversary at Oslo Jazzfestival.

This article uses material from the article Antti Sarpila from the free encyclopedia Wikipedia and it is licensed under the GNU Free Documentation License.

The Best Man Martin Lechner
Update Required To play the media you will need to either update your browser to a recent version or update your Flash plugin.