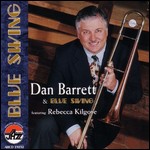 The earliest mention of Dan Barrett was in the Melody Maker, 10 February 1973, which reported that he played "Ory's Creole Trombone" at the end of Kid Ory's Funeral on 28 January that year. He also played with other musicians such as Teddy Buckner, Andy Blakeney and Alton Redd, all past members of Ory's band, during the funeral proceedings.

In addition to leading a quintet with Howard Alden, Barrett has performed as a sideman with Benny Goodman and Buck Clayton. Barrett is also the musical director for Arbors Records in Clearwater, Florida.

This article uses material from the article Dan Barrett (musician) from the free encyclopedia Wikipedia and it is licensed under the GNU Free Documentation License.

Night And Day René Scholl Jazztet
Update Required To play the media you will need to either update your browser to a recent version or update your Flash plugin.