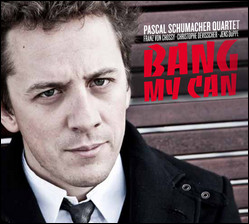 Pascal Schumacher (born 1979) is a Luxembourg jazz musician, composer and percussionist who has founded a number of groups including the Pascal Schumacher Quartet.[1] He also plays and composes classical chamber music.[2]

Schumacher cofounded the "Interchange" ensemble with saxophonist Nadine Kauffmann (1995) and, in 2001, the experimental percussion group "Stroke X". From 1997, he became increasingly involved in improvised music, especially jazz, playing with a number of different bands and performing with a variety of artists. In 2002, he set up his own Pascal Schumacher Quartet with Jef Neve (piano), Christophe Devisscher (bass) and Teun Verbruggen (drums). Their first album, Change Of The Moon was released in March 2004, providing the band with opportunities to travel across Europe as well as to Australia and South Africa. Their second album, Personal Legend was released in 2005 and their third, Silbergrau in 2007.[3][4] In a preview of the quartet's contribution to the London Jazz Festival in November 2010, Thomas Gray characterized Schumacher (vibes) and Frank von Chossy (piano) as "resourceful improvisers, with an abundance of lucid ideas effortlessly articulated over the many shifts of metre. Meanwhile," he comments, "Christophe Devisscher (on bass) and Jens Düppe (on drums) play with a mix of muscle, precision and exquisite dynamic sensitivity."[5]

In 2004, Jef Neve and Pascal Schumacher set up a duo (vibraphone and piano) playing a new kind of chamber music combining the sounds of Claude Debussy, Steve Reich and Igor Stravinsky.[7] The duo has been warmly welcomed by the Philharmonie Luxembourg for the "Rising Stars" concert series in some of the largest concert halls in Europe in association with the European Concert Halls Organisation.[2]

Pascal Schumacher also teaches at the Luxembourg Conservatory as well as at Hochschule für Musik Saar.

This article uses material from the article Pascal Schumacher from the free encyclopedia Wikipedia and it is licensed under the GNU Free Documentation License.