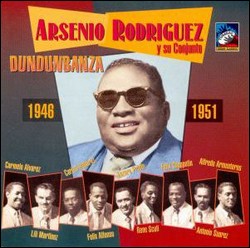 Arsenio Rodríguez (born Ignacio Arsenio Travieso Scull, Gúira de Macurijes, 31 August 1911 – Los Angeles, 31 December 1970)[1][2] was a Cuban musician who played the tres (Cuban guitar), reorganized the conjunto and developed the son montuno, and other Afro-Cuban rhythms in the 1940s and 50s. He claimed to be the true creator of the mambo, and was an important and prolific composer who wrote nearly two hundred song lyrics.

Rodrígues was born in Güira de Macurijes in Bolondrón, Matanzas Province as the third of fifteen children, fourteen boys and one girl.[3] As a young child, Rodríguez was blinded when a horse (or a mule) kicked him in the head.

Later, he became a musician, and eventually became one of the most renowned bandleaders on the island earning him the nickname El Ciego Maravilloso (the marvellous blind man). His music emphasized Afro-Cuban rhythm as well as the melodic lead of the tres, which he played. In 1936 he played his own compositions with the Sexteto Boston, led by his cousin Jacinto Scull. This disbanded in 1937, and he joined the Septeto Bellamar of cornetist José Interián in 1938. From 1940 to 1947 he led a band in Cuba, Arsenio Rodríguez y su Conjunto.

He then went to New York where he hoped to get cured from his blindness but was told that his optic nerves had been completely destroyed. This experience led him to compose the bolero La Vida es un Sueño (Life is a dream). He went on to play with percussionist Chano Pozo and other great musical artists of what became Latin Jazz like Dizzy Gillespie, Tito Puente, and Mario Bauza.

Arsenio's bassist and close friend for eight years Alfonso "El Panameño" Joseph as well as other members of Arsenio's band, such as Julian Lianos, who performed with Arsenio at the Palladium Ballroom in New York during the 1960s, have had their legacies documented in a national television production called La Epoca, expected to be released in theaters across the US in September 2008 and in Latin America in 2009. He had much success in the US and migrated there in 1952 one of the reasons being the better pay of musicians.[4]

Rodríguez improved the sonority of the Cuban septetos by using two or three trumpets instead of one, and introduced a piano, and later a conguero (conga drummer). His bongo player played the cencerro during montunos, which raised the sound level still further.[5] These larger groups (8-12 musicians) were called conjuntos. Rodríguez also added a new repertoire and a variety of rhythms and harmonic concepts to enrich the son, the bolero, the guaracha and some fusions, such as the bolero-mambo and the bolero-son.[1] Similar changes had been made somewhat earlier by the Lecuona Cuban Boys, who (because they were mainly a touring band) had less influence in Cuba. The overall 'feel' of the Rodríguez conjunto was more African than other Cuban conjuntos.

Rodríguez' claim to have invented the mambo is not really convincing, if by mambo he meant the big-band arrangements of Pérez Prado. Rodríguez was not an arranger: his lyrics and musical ideas were worked over by the group's arranger. The compositions were published with just the minimal bass and treble piano lines. To achieve the big-band mambo such as by Prado or Tito Puente requires a full orchestration where the trumpets play counterpoint to the rhythm of the saxophones. This, a fusion of Cuban with big-band jazz ideas, is not found in Rodríguez, whose musical forms are set in the traditional categories of Cuban music: the bolero, the son, the guaguancó and their various fusions.[6] He wrote La fonda de el bienvenido, Mami me gusto, papa upa.

At the end of the 1960s the mambo craze petered out, and Rodríguez continued to play in his typical style, although he did record some boogaloo numbers, without much success. As times changed, the popularity of his group declined. He tried a new start in Los Angeles. He invited Joseph to fly out to Los Angeles with him but died only a week later. Arsenio died in 1970 and his body was returned for burial to New York. There is much speculation about his financial status during his last years, but Mario Bauza denied that he died in poverty, arguing that Rodríguez had a modest income from royalties.[7]

Of the many tributes to Arsenio Rodríguez four are of special interest. The first, in 1972, was a Larry Harlow LP Tribute to Arsenio Rodríguez, Fania 404. On this, five of the numbers had been recorded earlier by Rodriguez' conjunto. Later, in 1994, The Cuban band Sierra Maestra recorded a CD Sierra Maestra: Dundunbanza!, World Circuit WCD 041. This had four Rodríguez numbers at full length. Jazz guitarist Marc Ribot recorded two albums made mostly of Rodríguez' compositions or songs in his repertoire called Marc Ribot y los Cubanos Postizos and Muy Divertido!.

Arsenio Rodriguez is mentioned in a national television production called La época, about the Palladium-era in New York, and Afro-Cuban music.[1] The film discusses Arsenio's contributions, and features some of the musicians he recorded with.[2] Others interviewed in the movie 840AM Interview include the daughter of legendary Cuban percussionist Mongo Sanatamaria – Ileana Santamaria, bongocero Luis Mangual and others.

This article uses material from the article Arsenio Rodríguez from the free encyclopedia Wikipedia and it is licensed under the GNU Free Documentation License.

Oh Girl Boogaloo Kings
Update Required To play the media you will need to either update your browser to a recent version or update your Flash plugin.