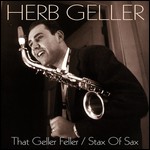 Herbert Arnold Geller (November 2, 1928 – December 19, 2013) was an American jazz saxophonist, composer and arranger. He was born in Los Angeles, California.[1]

His mother, Frances (née Frances Mildred Fullman, also known as Fannie Fullman; 1899–1980), worked at the Hollywood neighborhood cinemas playing piano, accompanying silent movies. At the age of 8, Geller was presented with an alto saxophone, purchased from a local music store owner and music teacher who was also a family friend and had a used instrument for sale. Two years later he started playing the clarinet. Geller attended Dorsey High School in the southwestern part of Los Angeles and joined the school band which among others included the musicians Eric Dolphy and Vi Redd. At the age of 14, he heard Benny Carter perform at the Orpheum Theatre in Los Angeles and was so impressed that he decided to pursue a career in music, specializing on the alto saxophone. Two years later, he had his first professional engagement in the band of jazz violinist Joe Venuti.[1]

A short time later he discovered the music of Charlie Parker, who became an important idol along with Benny Carter and Johnny Hodges. In 1949 Geller went to New York City for the first time, where he performed in the bands of Jack Fina, (with Paul Desmond also in the sax section), Claude Thornhill, Jerry Wald and Lucky Millinder. During this time he met pianist Lorraine Walsh in Los Angeles. Geller and Walsh got married in New York and she became an important musical partner, in addition to pursuing her own solo career.

In 1955 he won the "New Star Award" from DownBeat magazine and achieved worldwide recognition through his recordings with Clifford Brown. Later Geller worked in the bands of Louie Bellson and Benny Goodman.

Lorraine Geller died of an acute asthma attack in 1958. Deeply depressed, Herb Geller decided during a tour through Brazil with the Benny Goodman Orchestra not to return to the United States, but instead to stay in São Paulo for six weeks playing Bossa Nova music at a local club and then depart on a ship to Europe.

In 1962 he was offered a job with the big band of the Radio in the American Sector (RIAS) station in Berlin.[2] He accepted this engagement and performed there along with other Americans expatriates In Europe such as Benny Bailey, Joe Harris, and Nat Peck, as well as European musicians like Jerry van Rooyen, Ake Persson, and Francy Boland. In Berlin he met his second wife, Christine Rabsch. Geller stayed there for three years and then accepted a contract to play lead alto and also arrange for the big band of NDR in Hamburg. Here he was engaged for 28 years and made Hamburg his home. During this time the NDR big band developed from a post-war dance orchestra into a leading modern jazz ensemble. The endless list of participating musicians ranged from Don Byas, Joe Pass, Slide Hampton, Bill Evans, Red Mitchell, Art Farmer, Georgie Fame and Chet Baker to avant-garde musicians and rock/fusion, and included nearly all the big names of European jazz.

During his work at NDR, Geller was also busy with other things, including his own productions and tours. During this time he also participated in recordings and worked with such famous artists as Ray Charles, Ella Fitzgerald, Peter Herbolzheimer, and George Gruntz among others.

During his tenure at NDR, he also learned and performed on other woodwind instruments, including clarinet, flute, alto flute, bass flute, piccolo flute, oboe and English horn. On flute he played and recorded with Bill Evans and Brazilian guitarist Baden Powell.

He also composed the music and lyrics to two musicals: Playing Jazz (a musical autobiography) and Jazzy Josie B. (based on the life of Josephine Baker).

In 1996 the Senate of the Government of Hamburg gave him the title of "Professor". He taught at the Hochschule für Musik in Hamburg until his retirement. He continued teaching jazz improvisation and composition, occasionally doing seminars at various national and international institutes. He wrote a method of improvisation called "crossover" for Schott and Sons.

Geller performed regularly in Germany and abroad as a soloist at festivals and clubs in various formations including some big bands as well as with such diverse artists as Knut Kiesewetter, Lennie Niehaus, Jiggs Whigham, Rolf Kühn, Slide Hampton, Buddy DeFranco, Lew Soloff, Charlie Mariano and Jan Lundgren. He was very proud of his friendship with Benny Carter, his adolescent hero, with whom he recorded and performed. Geller participated at the Hollywood Bowl celebrations for Carter's ninetieth birthday in 1997. In 2008 he was featured on the Berlin Jazz Orchestra, music DVD (Polydor/Universal) Strangers In Night - The Music Of Bert Kaempfert which was released in 2012.

Geller died of pneumonia in a hospital in Hamburg, Germany, aged 85, on December 19, 2013. He had been undergoing treatment the past 12 months for a form of lymphoma.[3] He is interred at Forest Lawn Memorial Park in Glendale, California. (Plot: Commemoration, Map 1, Lot 3893).[4]

This article uses material from the article Herb Geller from the free encyclopedia Wikipedia and it is licensed under the GNU Free Documentation License.