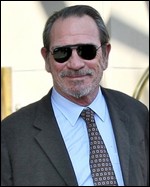 Tommy Lee Jones (born September 15, 1946) is an American actor and film director. He has received three Academy Award nominations, winning one as Best Supporting Actor for the 1993 thriller film The Fugitive.

His notable film roles include federal marshal Samuel Gerard in The Fugitive and its sequel U.S. Marshals, the villain "Two-Face" in Batman Forever, terrorist William Strannix in Under Siege, Agent K in the Men in Black films, former Texas Ranger Woodrow F. Call in Lonesome Dove, Ed Tom Bell in No Country for Old Men, a Texas Ranger in Man of the House and rancher Pete Perkins in The Three Burials of Melquiades Estrada. Jones has also portrayed real-life figures such as businessman Howard Hughes, executed murderer Gary Gilmore, Oliver Lynn in Coal Miner's Daughter and baseball great Ty Cobb.

Jones was born in San Saba, Texas,[2] the son of Lucille Marie (née Scott), a police officer, school teacher, and beauty shop owner, and Clyde C. Jones, an oil field worker;[1] the two were married and divorced twice. Jones has Cherokee ancestry from his grandmother.[3] He was a resident of Midland, Texas, and attended Robert E. Lee High School.

Jones graduated from the St. Mark's School of Texas, where he attended on scholarship and is now on the board of directors, and attended Harvard College on a need-based scholarship. He stayed in Mower B-12 as a freshman, across the hall from future Vice President Al Gore, the son of Sen. Albert Gore of Tennessee. As an upperclassman, he was roommates in Dunster House with Gore and Bob Somerby, who later became editor of the media criticism site the Daily Howler. Jones played offensive tackle[4] on Harvard's undefeated 1968 varsity football team, was nominated as a first-team All-Ivy League selection, and played in the memorable and literally last-minute Harvard 16-point comeback to tie Yale in the 1968 Game. He recounts his memory of "the most famous football game in Ivy League history" in the documentary Harvard Beats Yale 29-29. Jones graduated cum laude with a Bachelor of Arts in English in 1969, and his senior thesis was on "the mechanics of Catholicism" in Flannery O'Connor.[5][6]

Jones moved to New York to become an actor, making his Broadway debut in 1969's A Patriot for Me in a number of supporting roles. In 1970, he landed his first film role, appropriately playing a Harvard student in Love Story (Erich Segal, the author of "Love Story," said that he based the lead character of Oliver on the two undergrad roommates he knew while attending Harvard, Jones and Gore).[7]

In early 1971, he returned to Broadway in Abe Burrows' Four on a Garden where he shared the stage with Carol Channing and Sid Caesar. Between 1971 and 1975, he portrayed Dr. Mark Toland on the ABC soap opera, One Life to Live. He returned to the stage for a 1974 production of Ulysses in Nighttown with Zero Mostel. In films, he played an escaped convict hunted in Jackson County Jail (1976), a Vietnam veteran in Rolling Thunder (1977) and an automobile mogul, co-starring with Sir Laurence Olivier, in the Harold Robbins drama The Betsy.

In 1980, Jones earned his first Golden Globe nomination for his portrayal of country singer Loretta Lynn's husband, Doolittle "Mooney" Lynn, in the popular Coal Miner's Daughter. In 1981, he played a drifter opposite Sally Field in Back Roads, a comedy that received middling reviews.[8]

In 1983, he received an Emmy for Best Actor for his performance as murderer Gary Gilmore in a TV adaptation of Norman Mailer's The Executioner's Song. That same year he starred in a pirate adventure, Nate and Hayes, playing the heavily bearded Captain Bully Hayes.

In 1989, he earned another Emmy nomination for his portrayal of Texas Ranger lawman Woodrow F. Call in the acclaimed television mini-series Lonesome Dove, based on the best-seller by Larry McMurtry.

In the 1990s, blockbuster hits such as The Fugitive co-starring Harrison Ford, Batman Forever co-starring Val Kilmer, and Men in Black with Will Smith made Jones one of the best-paid and most in-demand actors in Hollywood. His role in The Fugitive won wide acclaim and an Academy Award for Best Supporting Actor and a sequel. When he accepted his Oscar, his head was shaved for his role in the film Cobb, a situation he made light of in his speech with: "All a man can say at a time like this is 'I am not really bald.'"

Among his other well-known performances during the 1990s were those of the accused conspirator Clay Shaw/Clay Bertrand in the 1991 film JFK (earning him another Oscar nomination), as a terrorist who hijacks a U.S. Navy battleship in 1992's Under Siege and as a maximum-security prison warden in way over his head in 1994's Natural Born Killers.

In 2005, the first theatrical feature film Jones directed, The Three Burials of Melquiades Estrada, was presented at the 2005 Cannes Film Festival. In it, Jones speaks both English and Spanish. It won him the Best Actor Award. His first film as a director had been in The Good Old Boys in 1995, a made-for-television movie.

Two strong performances in 2007 marked a resurgence in Jones' career, one as a beleaguered father investigating the disappearance of his soldier son in In the Valley of Elah, the other as a Texas sheriff hunting an assassin in the Oscar-winning No Country for Old Men. For the former, he was nominated for an Academy Award.

Jones has been a spokesperson for Japanese brewing company Suntory since 2006. He can be seen in various Japanese TV commercials of Suntory's Coffee brand Boss as a character called "Alien Jones," an extraterrestrial who takes the form of a human being to check on the world of humans. There are 23 such commercials that can be seen on YouTube.

In 2010, Jones appeared alongside Ben Affleck in the recession drama, The Company Men. The film premiered at the Sundance Film Festival, where early reviews praised Jones' performance as "pitch-perfect".[9] On May 26, 2010, LeicesterSquareTV reported that, after weeks of speculation, Hayley Atwell confirmed that Jones has signed on for a role in the upcoming Marvel Studios' film, Captain America: The First Avenger.[10] He also directed, produced, and co-starred with Samuel L. Jackson in an adaptation of The Sunset Limited.

At the 2000 Democratic National Convention, he presented the nominating speech for his college roommate, Al Gore, as the Democratic Party's nominee for President of the United States.

Jones was married to Kate Lardner, the daughter of Ring Lardner Jr. from 1971 to 1978. Jones has two children from his second marriage to Kimberlea Cloughley, the daughter of Phil Hardberger, former mayor of San Antonio: Austin Leonard (born 1982) and Victoria Kafka (born 1991). On March 19, 2001, he married his third wife, Dawn Laurel.

Jones resides in Terrell Hills, Texas, a suburb of San Antonio. Jones speaks fluent Spanish.[11] He reportedly owns a large ranch in San Saba County, Texas. He also owns another ranch near Van Horn, Texas, which served as the set for Jones' film The Three Burials of Melquiades Estrada. Additionally, he owns a home and farm in polo mecca Wellington, Florida. He is a serious polo player, having kept polo ponies for decades, and is also an avid San Antonio Spurs fan, often seen courtside at Spurs games.

In 2008, Jones signed on with Chesapeake Energy to be a spokesperson for a public relations campaign to promote shale gas (natural gas derived from shale rock through fracturing or "fracking") in Texas. The New York Times later characterized the campaign as misleading.[12]

This article uses material from the article Tommy Lee Jones from the free encyclopedia Wikipedia and it is licensed under the GNU Free Documentation License.