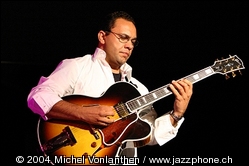 Biréli Lagrène (born 4 September 1966) is a French jazz guitarist. He came to prominence in the 1980s for his Django Reinhardt-influenced style. He often performs in swing, jazz fusion and post-bop styles.

Lagrène was born on 4 September 1966 in Alsace, France, into a Romani family and community. His father and grandfather were guitarists, and he was raised in the gypsy guitar tradition. He started playing at age four or five, and by seven was improvising jazz in a style similar to Django Reinhardt's, who his father admired and wanted his sons to emulate. In 1980, while still in his early teens, he recorded his first album, Routes to Django: Live at the Krokodil (Jazz Point, 1981).[1][2]

During the next few years, Lagrène toured with Al Di Meola, Paco de Lucía, and John McLaughlin, all of them guitarists, and played with Benny Carter, Benny Goodman, and Stéphane Grappellii. He joined Larry Coryell and Vic Juris in New York City for a tribute to Reinhardt in 1984, and went on tour with Coryell and Philip Catherine. He also performed with Jaco Pastorius, Stanley Clarke, the Gil Evans Orchestra, Christian Escoudé, and Charlie Haden. In 1989 he performed in a duo with Stanley Jordan.[1]

This article uses material from the article Biréli Lagrène from the free encyclopedia Wikipedia and it is licensed under the GNU Free Documentation License.

Hit The Road Jack (Radio Edit) Joshua Redman
Update Required To play the media you will need to either update your browser to a recent version or update your Flash plugin.