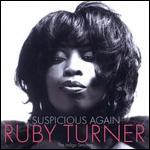 Ruby Turner (born 22 June 1958) is a Jamaican R&B and soul singer, songwriter and actress. Born in Montego Bay, Jamaica,[1][2] she moved at the age of nine with her family to Handsworth, Birmingham, England.[1] She is best known for her albums and single releases on both sides of the Atlantic, and has sung backing vocals for others such as Bryan Ferry, UB40, Steel Pulse, Steve Winwood, Jools Holland and Mick Jagger, as well as writing songs that have been covered by many artists including Lulu, Yazz and Maxi Priest.[1] She achieved the rare feat, for a British singer, of reaching no. 1 on the US R&B chart, with "It's Gonna Be Alright" in February 1990.

Between 1986 and 1995, eight of her singles appeared in the UK Singles Chart with "I'd Rather Go Blind" being the most successful reaching no. 24 in 1987.[3] Turner performed at the Birmingham Heart Beat 86 concert,[4] which featured George Harrison; and also sang on BBC Television's Jools Holland's Hootenanny, from 2007 to 2013 inclusive. She has also appeared as an actress on stage, film and television.

In the early 1980s Turner worked with Alexis Korner. In 1983, she recorded with UB40. She achieved a solo recording contract with Jive Records after singing backing vocals on Culture Club's From Luxury to Heartache.[1]

Her first album Women Hold Up Half The Sky, was released in 1986 to critical acclaim.[1] and produced hit singles such as a cover version of the Staple Singers song,"If You're Ready (Come Go With Me)", a duet with Jonathan Butler, and the Etta James standard "I'd Rather Go Blind".[1][3]

In March 1987, Turner sang on the Ferry Aid single, "Let It Be". Around this time she also released the album, The Motown Songbook, on which she performed with Motown others including The Four Tops, The Temptations and Jimmy Ruffin. Turner appeared on Corey Hart's album, Young Man Running (1988), on the duet "Spot You in a Coalmine".

In 1998 she recorded the album, Call Me By My Name, with British rhythm and blues luminaries Boz Burrell, Zoot Money, Bobby Tench and Stan Webb. On New Year's Eve 1999, she sang the National Anthem for Queen Elizabeth II, Prime minister Tony Blair and other dignitaries, at the opening of the Millennium Dome in London.[8]

Turner sang backing vocals on Mick Jagger's 2001 album, Goddess in the Doorway, and performed "Nobody But You" on the 2002 album Jools Holland's Big Band Rhythm & Blues.[9]

In 2007, Turner presented a documentary Shout Sister Shout about Sister Rosetta Tharpe for BBC Radio 2.[5] She sang on Seasick Steve's album, I Started Out with Nothin and I Still Got Most of It Left (2008). In September 2009, Turner released her first gospel music album, I'm Travelling On.[5]

On 4 June 2012, Turner was one of the performers at the Diamond Jubilee Concert outside Buckingham Palace in London, when she joined Jools Holland on stage.

As an actress, she has appeared in productions of A Streetcar Named Desire, Carmen Jones, Fame, as well as One Love at the London's Lyric Theatre, Hammersmith.[1] Turner also had a small part in the 2003 film Love Actually.

In 2006, Turner made an appearance in Little Britain Abroad. She played the Sheriff Judy.[10] On 12 October 2007, she appeared as a guest star (as herself) in the BBC One soap opera, Doctors.[1] The episode title was entitled "Raising The Roof".

Her most recent theatre appearance, was a successful run in the London West End production of the musical Simply Heavenly, which was nominated for 'Outstanding Musical' at the 2005 Laurence Olivier Awards.[5] In 2009, Turner appeared in the BBC drama, Hotel Babylon.[11]

This article uses material from the article Ruby Turner from the free encyclopedia Wikipedia and it is licensed under the GNU Free Documentation License.