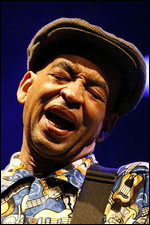 Little Axe is the stage name of Skip McDonald (born Bernard Alexander, 1949, Dayton, Ohio[1]) an American musician. McDonald played jazz, doo-wop, and gospel when young, and relocated to New York City as a teenager with his band of friends, called The Entertainers.[1]

Axe joined the group Wood Brass & Steel in 1973 with bass guitarist Doug Wimbish and drummer Harold Sargent. The group recorded two albums before their 1979 breakup.[1] Axe then became one of the members of the house band for Sugarhill Records and appeared as a session player on many early rap albums, one of which was The Message by Grandmaster Flash and The Furious Five.

It was not until the 1990s, McDonald assumed the moniker "Little Axe" as he began moving from a hip hop sound to music drawing from an array of musical influences. Blending genres including such diverse musical influences as R&B, gospel, Dub music, and jazz has led some music reviewers to describe his overall sound as that of World music. However, it was the sound of the blues that is most woven throughout his music since the early 1990s. He has been working steadily as a studio musician, recording both his own blues albums, continuing to appear as a guest act on other artists' albums as well. His most recent albums have been released on Real World Records. Alan Glen is featured on harmonica on the albums.[1]

In 2009 he collaborated with Mauritanian musician Daby Touré to produce a record titled Call My Name.

This article uses material from the article Little Axe from the free encyclopedia Wikipedia and it is licensed under the GNU Free Documentation License.