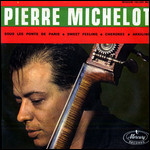 Michelot was a member of the Jacques Loussier Trio, known for the Play Bach album series. Together with Miles Davis, he was responsible for the critically acclaimed soundtrack of Louis Malle's Ascenseur pour l'échafaud. He also appeared as an unnamed bass player in the movie Round Midnight.

This article uses material from the article Pierre Michelot from the free encyclopedia Wikipedia and it is licensed under the GNU Free Documentation License.