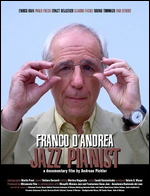 His career began in 1963 with Nunzio Rotondo playing for the Italian broadcast RAI and in Gato Barbieri's band in 1964-65. D'Andrea continued then with the Italian vanguard ensemble Modern Art Trio 1968-72 and Perigeo 1972-77. Since 1978 he's been playing with his own bands (Trio, Quartet, Eleven) and as a solo performer. He has been a teacher at the Conservatorio "F.A. Bonporti" in Trento 1994-2006 and currently at mitteleuorpean jazz academy in Merano and at Siena Jazz.

In 2010 he received for his life's work the Award "Musicien Européen de l'année" (Académie du Jazz de France)[2] and 2011 the Honorary Award at the Italian Jazz Awards - Luca Flores.

This article uses material from the article Franco D'Andrea from the free encyclopedia Wikipedia and it is licensed under the GNU Free Documentation License.

Friends Tympanic Jazzband
Update Required To play the media you will need to either update your browser to a recent version or update your Flash plugin.