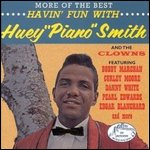 Huey "Piano" Smith (born January 26, 1934, New Orleans, Louisiana[1]) is an American rhythm and blues pianist whose sound was influential in the development of rock and roll.

His piano playing incorporated the boogie styles of Pete Johnson, Meade Lux Lewis, and Albert Ammons; the jazz style of Jelly Roll Morton; and the piano playing of Fats Domino.[1] Allmusic journalist, Steve Huey, also noted "At the peak of his game, Smith epitomized New Orleans R&B at its most infectious and rollicking, as showcased on his classic signature tune, "Don't You Just Know It."[2]

Smith was born in New Orleans' Garden District, and was influenced by the innovative work of Professor Longhair.[3] He became known for his shuffling right-handed break on the piano that influenced other Southern players.[4]

Smith wrote his first song on the piano, "Roberson Street Boogie" (named after the street where he lived), when he was only eight years old, and performed the tune with a friend. They billed themselves as Slick and Dark. Smith attended McDowell High and Xavier University of Louisiana in New Orleans.[5] When Smith was fifteen he began working in clubs and recording records with his flamboyant partner, Eddie Jones, who rose to fame as Guitar Slim.[4] When he was eighteen, in 1952, he signed a recording contract with Savoy Records, which released his first known single, "You Made Me Cry". In 1953 Smith recorded with Earl King.[6]

In 1955, Smith turned 21, and became the piano player with Little Richard's first band for Specialty Records.[2] The same year he also played piano on several studio sessions for other artists such as Lloyd Price.[2] Two of the sessions resulted in hits for Earl King ("Those Lonely Lonely Nights"), and Smiley Lewis ("I Hear You Knocking").[2]

In 1958, Vin Records, a subsidiary of Ace Records, released a popular single "Little Chickie Wah Wah" with Clowns singer Gerri Hall, under the billing of Huey and Jerry. Meanwhile, Ace Records released several more singles from 'Huey "Piano" Smith and His Clowns', including "We Like Birdland", "Well I'll Be John Brown", and "Don't You Know Yockomo" (later in 1964, New Zealand artist Dinah Lee took her energetic version of this song to number 1 in both New Zealand & Australia).

Their most famous single, released in 1958, "Don't You Just Know It" b/w "High Blood Pressure", hit number 9 on the Billboard Pop chart and number 4 on the Rhythm and Blues chart.[2] It was their second million seller.[1]

In 1959, Ace Records erased Huey Smith's vocal from the now classic single Smith composed, arranged and performed entitled "Sea Cruise", and replaced it with a more energetic vocal track by white singer Frankie Ford.[2] The tune was a huge hit for Ford.[8]

In the years following, he made several comebacks, performing as 'Huey "Piano" Smith and His Clowns', 'The Hueys', 'The Pitter Pats', and as 'Shindig Smith and the Soul Shakers', but he has never attained his former degree of success.[2]

In 2000, Smith was honored with a Pioneer Award by the Rhythm and Blues Foundation.[9]

This article uses material from the article Huey "Piano" Smith from the free encyclopedia Wikipedia and it is licensed under the GNU Free Documentation License.