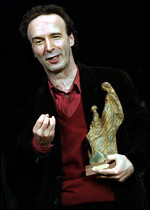 Benigni was born in Manciano, Castiglion Fiorentino, Italy, the son of Isolina Papini, a fabric inspector, and Luigi Benigni, a bricklayer, carpenter, and farmer.[2] His first experiences as a theatre actor took place in 1972, in Prato. During that autumn he moved to Florence where he took part in some experimental theatre shows, some of which he also directed. In 1975, Benigni had his first theatrical success with Cioni Mario di Gaspare fu Giulia, written by Giuseppe Bertolucci.

Benigni became famous in Italy in the 1970s for a shocking TV series called Onda Libera, on RAI2, by Renzo Arbore, in which he interpreted the satirical piece "anthem of the melt body" (L'inno del corpo sciolto, a hymn to defecation). A great scandal for the time, the series was suspended due to censorship. His first film was 1977's Berlinguer ti voglio bene, also by Giuseppe Bertolucci.

Afterwards, he appeared during a public political demonstration by the Italian Communist Party, with which he was a sympathiser, and on this occasion he took in his arms and dangled the national leader Enrico Berlinguer, a very serious figure. It was an unprecedented act, given that until that moment Italian politicians were proverbially serious and formal. It represented a breaking point, after which politicians experimented with newer habits and "public manners", attended fewer formal events and, generally speaking, modified their lifestyle in order to exhibit a more popular behaviour. Benigni was censored again in the 1980s for calling the Pope John Paul II something impolite during an important live TV show ("Wojtylaccio", meaning "Bad Wojtyla" in Italian).

His popularity increased with L'altra domenica (1978), another TV show by Arbore in which Benigni portrays a lazy film critic who never watches the films he's asked to review.

Benigni's first film as director was Tu mi turbi (You upset me, 1983). On the set he met the Cesenate actress Nicoletta Braschi, who was to become his wife, and who has starred in most of the films he directed.

In 1984, he played in Non ci resta che piangere ("Nothing left to do but cry") with the very popular comic actor Massimo Troisi. The story was a fable in which the protagonists are suddenly thrown back in time to the 15th century, just a little before 1492. They start looking for Columbus in order to stop him from discovering the Americas (although for very personal love reasons), but are not able to reach him.

Benigni in America and the collaboration with Cerami

Beginning in 1986, Benigni starred in three films by American director Jim Jarmusch. In Down By Law (1986) (which in Italy had its title spelled "Daunbailò", in Italian phonetics) he played Bob, the innocent abroad, convicted for murder, whose irrepressible good humour and optimism help him escape and find love (also starring Braschi as his beloved.) In Night on Earth, (1991) he plays a cabbie in Rome, causing his passenger, a priest, great discomfort and a heart attack by confessing his bizarre sexual experiences. Later, he also starred in the first of Jarmusch's series of short films, Coffee and Cigarettes (2003).

In 1993, he starred in Son of the Pink Panther, directed by veteran Blake Edwards. There, he played Peter Sellers' Inspector Clouseau's illegitimate son who is assigned to save the Princess of Lugash. The film bombed in the US, but was a hit in Italy, his home country.

Life Is Beautiful and beyond

Benigni is probably best known outside Italy for his 1997 tragicomedy Life Is Beautiful (La vita è bella), filmed in Arezzo, also written by Cerami. The film is about an Italian Jewish man who tries to protect his son's innocence during his internment at a Nazi concentration camp, by telling him that the Holocaust is an elaborate game and he must adhere very carefully to the rules to win. Benigni's father had spent two years in a concentration camp in Bergen-Belsen,[3] and La vita è bella is based in part on his father's experiences. Although the story and presentation of the film had been discussed during production with different Jewish groups to limit the offense it might cause, the film was criticized by a minority of critics who accused it of presenting the holocaust without suffering, and some who considered that "laughing at everything" was not appropriate. More favorable critics praised Benigni's artistic daring and skill to create a sensitive comedy involving the tragedy, a challenge that Charles Chaplin confessed he would not have done with The Great Dictator had he had been aware of the horrors of the Holocaust.

In 1998, the film was nominated for seven Academy Awards. At the 1999 ceremony Benigni received the award for Best Actor (the first for a male performer in a non-English-speaking role, and only the third overall acting Oscar for non-English-speaking roles), the score by Nicola Piovani won Best Original Dramatic Score, and the film was awarded the Oscar for Best Foreign Language Film, which Benigni accepted as the film's director.

Famously, in the midst of being so giddy with delight after Life Is Beautiful was announced as the Best Foreign Film, Benigni climbed over and then stood on the backs of the seats in front of him and applauded the audience before proceeding to the stage. And after winning his Best Actor Oscar later in the evening, he said in his acceptance speech, "There must be some terrible mistake, I used up all my English!" At the following year's ceremony, when he read the nominees for Best Actress (won by Hilary Swank for Boys Don't Cry), host Billy Crystal playfully appeared behind him with a large net to restrain Benigni if he got excessive with his antics again.

Benigni played one of the main characters in Asterix and Obelix vs Caesar as Detritus, a corrupted Roman tax collector who wants to kill Julius Caesar, thereby seizing control of the Roman Republic.

As a director, his 2002 film Pinocchio, one of the costliest films in Italian cinema, performed well in Italy but bombed in North America with a 0% critics' score at Rotten Tomatoes.

That same year, he gave a typically energetic and revealing interview to Canadian filmmaker Damian Pettigrew for Fellini: I'm a Born Liar (2002), a cinematic portrait of the maestro that was nominated for Best Documentary at the European Film Awards, Europe's equivalent of the Oscars. The film went on to win the prestigious Rockie Award for Best Arts Documentary at the Banff World Television Festival (2002) and the Coup de Coeur at the International Sunnyside of the Doc Marseille (2002).

Benigni's latest film is La tigre e la neve (The Tiger and the Snow, 2005), a love story set during the initial stage of the Iraq War.

On 15 October 2005, he performed an impromptu strip tease on Italy's most watched evening news program, removing his shirt and draping it over the newscaster's shoulders. Prior to removing his shirt, Benigni had already hijacked the opening credits of the news program, jumping behind the newscaster and announcing: "Berlusconi has resigned" (Benigni is an outspoken critic of media tycoon and then former Prime Minister Silvio Berlusconi). The previous day, he had led a crowd of thousands in Rome on Friday in protest at the center-right government's decision to cut state arts funding by 35 percent.

On 2 February 2007, he was awarded the degree of Doctor Honoris Causa by the Katholieke Universiteit Leuven, Belgium. On 22 April 2008, the degree of Doctor Honoris Causa was conferred on him by the University of Malta, celebrated by a Settimana Dantesca including Benigni's first stage appearance at a university and the premiere of his performing with Dante scholar Robert Hollander.

Benigni has reportedly received offers to bring his Dante show to Broadway, all of which he has turned down.

As Benigni is not very active in the hollywood movie industry, he is by far the only Oscar winner that has not co-acted with other winners in movies.

Benigni is an improvisatory poet (poesia estemporanea is a form of art popularly followed and practiced in Tuscany), appreciated for his explanation and recitations of Dante's Divina Commedia by memory. He has reached over 45% Italian households with his lectures on the Divine Comedy.

During 2006 and 2007, Benigni had a lot of success touring Italy with his 90-minute "one man show" show TuttoDante (Everything About Dante). Combining current events and memories of his past narrated with an ironic tone, Benigni then begins a journey of poetry and passion through the world of the Divine Comedy.

TuttoDante has been performed in numerous Italian piazzas, arenas, and stadiums for a total of 130 shows, with an estimated audience of about one million spectators. Over 10 million more spectators watched the TV show, Il V° dellInferno ("The 5th of Hell"), broadcast by Rai Uno on 29 November 2007, with re-runs on Rai International. Audience reaction to the show was so strong that Benigni stated: "Its been incredible work. Ill treasure this experience as one of the sweetest, most popular, and emotional memories of my life."

Benigni began North American presentations of TuttoDante with an announcement that he learned English to bring the gift of Dante's work to English speakers. The English performance incorporates dialectic discussion of language and verse and is a celebration of modernity and the concept of human consciousness as created by language.

Roberto Benigni also is a singer-songwriter. Among his performances recorded are some versions of Paolo Conte's songs.

This article uses material from the article Roberto Benigni from the free encyclopedia Wikipedia and it is licensed under the GNU Free Documentation License.