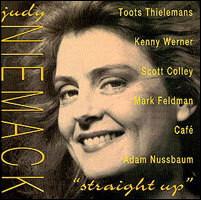 Niemack sang in a church choir from age seven. She decided on a professional career in singing at age 17, and soon after met Warne Marsh, who encouraged her to explore jazz. She studied jazz at Pasadena City College, and later at the New England Conservatory of Music and the Cleveland Institute of Music. Her debut album was released in 1977; she has recorded several albums under her own name in addition to working with Toots Thielemans, James Moody, Lee Konitz, Clark Terry, Kenny Barron, Fred Hersch, Kenny Werner, Joe Lovano, Eddie Gomez, and the Widespread Depression Jazz Orchestra. She has toured Europe many times and also teaches music.

This article uses material from the article Judy Niemack from the free encyclopedia Wikipedia and it is licensed under the GNU Free Documentation License.

Mission Impossible Monday Night Orchestra
Update Required To play the media you will need to either update your browser to a recent version or update your Flash plugin.