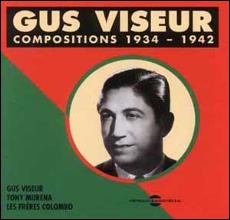 Gus Viseur was a virtuoso in the musette genre, during the swing era in the 1930s. He is the only jazz accordionist who is a member of the famous Hot Club de France, conducted by Charles Delaunay.

Gus Viseur began his career playing in the streets of Paris. He managed to get a great sound from a chromatic button accordion. It was clear that he was doing something innovative: He helped create the accordion-jazz style known as manouche. Meeting Django Reinhardt and performing with the legendary Quintet of the Hot Club of France was an important new chapter in his life. Later he even played bebop in the fifties. He was the first to draw a link between Musette and Jazz. In addition to his numerous recordings he also performed in cabarets and nightclubs with musicians including Didi Duprat.

He recorded his first record in 1937 and accompanied Édith Piaf in 1940. He recorded all the genres of the musette repertoire: valse, tango, paso doble, etc.

This article uses material from the article Gus Viseur from the free encyclopedia Wikipedia and it is licensed under the GNU Free Documentation License.

Echoes Of Harlem Octet de Jazz Neuchâtel
Update Required To play the media you will need to either update your browser to a recent version or update your Flash plugin.