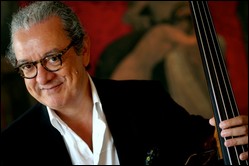 Del Fra first played guitar, then switched to upright bass when he was sixteen years old. He studied at a conservatory, played in the RAI Orchestra, and did work as a studio musician for film scores in the 1970s.[1] Concomitantly, he began playing as a sideman in jazz venues in Rome for touring musicians, such as Art Blakey, Art Farmer, and Kai Winding. He joined Enrico Pieranunzi's ensemble in the late 1970s and played with Chet Baker; Del Fra and Baker played together frequently thereafter until Baker's death.

Del Fra eventually moved to Paris, where he worked in a trio setting with Alain Jean-Marie and Al Levitt and played local clubs as the backing band for visiting Americans. He also worked with Charles Loos, Barney Wilen, Lee Konitz, Joe Diorio, and Bob Brookmeyer in the 1980s and 1990s.

This article uses material from the article Riccardo Del Fra from the free encyclopedia Wikipedia and it is licensed under the GNU Free Documentation License.

Stuffy Lisa Pollard & Red Holloway
Update Required To play the media you will need to either update your browser to a recent version or update your Flash plugin.